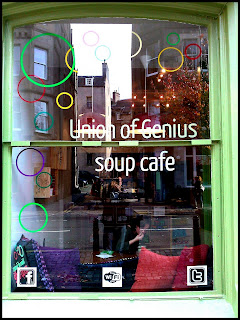 Today I realized that maybe I moved to Leith a bit too soon. Ok, that’s not quite true (I rather enjoy living out of the centre), but I know that if I still lived on Forest Hill, I would be spending most of my lunchtimes walking down the wee street beside the Sandy Bell and crossing Forest Road, and popping into Union of Genius.
Perhaps I’m a bit biased. I have this raging dislike (hatred may be too strong a word, wait till later in the week and we shall see) for fussy food, and this small café that only serves soups is right up my alley. First of all, anyone whose first tweet to me wishes me luck on my PhD gets approval in my book. I need all the bloody luck I can get. Secondly, there are a lot of things to recommend this wee shop, aside from the 6 changing soups:
1.     They use locally sourced ingredients. Under this point we may include their use of altering breads from local Polworth bakery, Dough Re Mi; coffee from Artesan Roast Coffee, and The Chocolate Tree Hot Chocolates.
2.     They mark their soups in a friendly manner for picky eaters like myself: Vegan and Veggie. So I know which soups to avoid (creamy soups, or those with coconut…ew). (As an aside, I also appreciate the mayo being marked on Koyama’s menu)
3.     They use compostable packaging and will gladly compost it for you if you return it. And in doing so, you get a nice initial on your loyalty card. This is an interesting concept, and one I hope catches on.
4.     You get more than one piece of bread to go with the soups.
5.     They are just so darned nice.
Ok, so all that being laid out in an orderly fashion, on to the food. I had the minestrone soup (vegan) and it was tasty. Made with wee pasta balls and hearty chunks of vegetables that were not blitzed into oblivion, as is the usual way here in Europe (I’m pretty sure I didn’t encounter a blended veggie soup till I moved here; where I’m from, we like out vegetables chunky in soup or battered and deep fried). The soup was good. It had the right amount of seasoning and the olive bread that was recommended was a good accompaniment in the Italian theme of my lunch, but didn’t blow my socks off. Peter’s Yard still gets my bread-bakers-deliciousness award.
The coffees were reasonably priced (£1.80 for a good sized americano) and from good Artisan Roast beans. Everyone finished theirs, so I assume they were also relatively pleased. 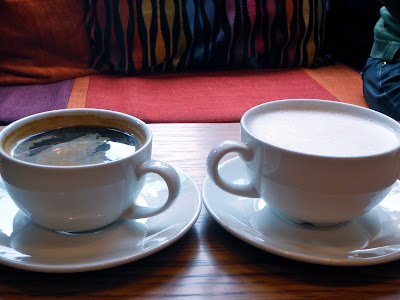 Everyone seemed to really enjoy their soups; I’ll be checking up with UoG on Facebook to find out what each day holds as they get through their first days and hit their stride, right in time for winter.
p.s. they have free wifi. I tweeted a photo of the shop right before I went in.

First choice on the extensive soup board (6 if I recall) was Chorizo & Kale. I suspect it’s a childhood memory, but I always associate kale with enjoyable Saturday morning walks alongside kale fields with a crunchy hard frost and a weak winter sun low in the sky, and for that reason alone this soup had to be tried. Chorizo & Kale is a perfect combination of Mediterranean and Scottish, and the spicy and “meatiness” of the Chorizo really permeates the soup, which when combined with kale (which is a properly serious bit of Scottish greenery), makes for a full bodied soup – not heavyweight or stodgy, but full of flavour and chunkiness. Would I have this soup again, yes, definitely. 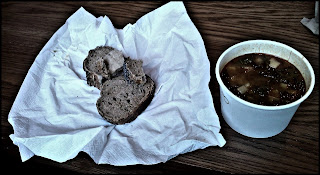 The bread (which comes in the price) came in a variety of types and I had the eight seed bread, which came in two decent sized slices and was a tasty, chunky and seedy (in a good way), being covered in poppy seeds. To finish I had white hot chocolate with cardamom, which tasted like Christmas had come early. I am no big fan of hot chocolate, preferring the sharper taste of coffee or tea in my milky drinks, but this was light, warm, milky and spicy and very pleasant. If I was passing Union of Genius on one of those cold winter mornings I mentioned earlier (fruitlessly searching for frosted kale on the Middle Meadow Walk?) then I would definitely stop in for another of these. 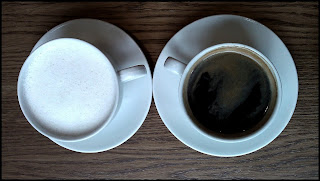 I like soup. I have it nearly every day for my lunch in winter so I was more than happy to accompany Blythe, Miriam and Angus to Union of Genius, a new soup café that opened on Forrest Road. I was impressed by the choice of soup on offer – about 6 different flavours in total – the majority of which where either vegetarian or vegan which was nice to see. I was tempted to get the lentil, but in the end chose the minestrone which came with some lovely soft brown olive bread.

The soup itself was what you would expect from a minestrone; hearty, tasty and packed full of veg, but an interesting difference was having little beads of pasta scattered throughout it rather than having the small strands of spaghetti in it like I’m used to. This reminded me of pearl barley and made the soup seem even more comforting so it was a winner with me. I would definitely get it again but at £3.80 a go for a large portion (including the bread) it’s not something I could do everyday, but it would be nice as a monthly treat.

We were lucky to get seats around the only table in the café so we took advantage of the situation and ordered drinks. I went for a cappuccino and when she brought it over the owner apologised for not having any chocolate sprinkles to put on the top as it was their first day of trading. This did make the top of the coffee look a bit bare and the froth look a bit more foam-like than normal but the coffee itself tasted fine and was a nice end to a lovely lunch.


What really made this place stand out for me among all the other soup and sandwich places in the area though is its recycling policy. All the cups, bowls, lids, bags and cutlery are compostable so if you take the packaging back to the shop they will make sure it gets disposed of correctly. I really like this idea- we have recycle bins at my work but I know a lot of other places don’t so it’s a great way of encouraging people to think about their waste. And every time you take your packaging back you get your loyalty card stamped which you can then trade in for a free coffee when it’s full- so I hope by the time my cards full they’ll have invested in some chocolate sprinkles to cover my free cappuccino with!

Blythe’s Verdict
Freshly opened today, Union of Genius is “Scotland’s first soup café”. Located on Forrest Road, on the same side as sushi favourite Koyama, it brings together a “souper-group” of local producers to provide punters with much wholesome soupy goodness, along with lovely cakes from Love Pure Cakes, and stand-out hot chocolate from The Chocolate Tree.

Now, I’m not sure if I’ve mentioned this, but I rather like soup. In fact, I’m working on structural ideas for a Lunch Quest: Soupy Soup League Table. The whole idea of a café dedicated to soup fills me with a huge amount of happiness. So it was with considerable delight that I set forth for Forrest Road. On my way, I was joined by my former Widget-Adviser-in-Chief, Angus, who had filed a lovely review from Bath for LQ: Roving Reporters, last week. When we arrived, we were greeted by special guest, Mel, and the ever-prompt MJ.

First things first: Union of Genius is wee. It has one window table, which could seat around six, with an additional shelf area for another two folk. So, you need to time it perfectly to secure a seat. Upon arrival, we found the seats taken, so made a quick plan for which locality we would repair to for a spot of al fresco souping, as we queued. We were delighted to see esteemed friend of Lunch Quest, Tony, two places in front of us in the queue, making similar plans.

The staff were extremely welcoming, and though they spoke of first day nerves and a mild sense of chaos, they served us accurately and with a sound knowledge of what they were all about. Each bowl of soup comes with two generous slices of bread. On a recommendation, I matched my cream of wild mushroom soup (from a choice of six options) with an olive bread (from the selection of four different breads).

In a rare union of timing genius, as MJ completed ordering procession of ordering, the window table freed up. We were delighted to plonk ourselves down. This meant that we had the take away bowls and cutlery, instead of crockery, but we were more than happy with this arrangement. This also meant that the return of our packaging for composting (all materials are compostable and they encourage you to return them, so this can be turned in to a reality) was all the easier. 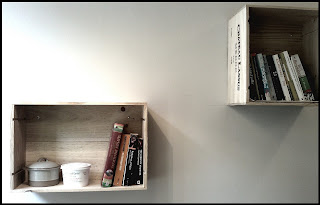 I was extremely pleased with my soup. I cook mushroom soup a fair amount, and I thought this was an excellent example. The olive bread worked very well as an accompaniment, so kudos to the recommendation. It was still not quite as good as the soup from the , but a solid match for the soups at The Mulroy and The Bonham.

With soup consumed, we turned our attention to coffees. I opted to try the Genius Mocha. It was a rich, dark treat, with a truly joyful depth of flavour.

Overall, Union of Genius is an excellent addition to the lunch circuit. Given its compact size, it’s more likely to be a take away stop, but I’d be delighted to wolf down a bowl of their hearty fare at my desk. Despite their first day nerves, I don’t think they have many issues to iron-out. I’m happy to recommend that you head along to sample their soupy delights, at your earliest convenience.

We ate: Minestrone (2), Chorizo and Kale, and Cream of Wild Mushroom soups