I hadn’t done a brown-bag lunch review for a while, so thought that I should rectify that, almost immediately. Accordingly, I wandered along to The Square, on St Andrew Square, to see what lunchtime delights they had on offer. 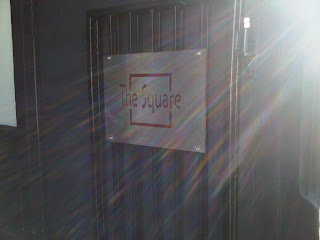 I’m still trying to find the opportunity to review the new Greggs hot sandwich range, but it just doesn’t seem to be happening. I’ll try to make a concerted effort, tomorrow.

I digress. The Square is a popular little café and deli, with seating for around a dozen folk. It opens early for breakfast service and tends to be very popular with the local office crowd. I’ve stopped by for a sandwich on a couple of occasions, but it’s just slightly beyond my usual lunchtime scope, particularly given that trips there involve walking past both Greggs and Snax (not to mention the Hong Fu Noodle place, which we must try, one of these days).

Today, I found it as busy as ever. I was in the mood for a roll, so I chose from their nice array. 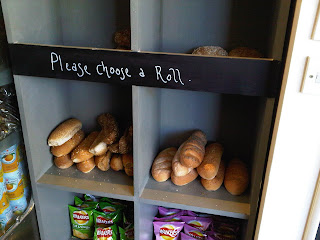 I considered their impressive array of soups: no less than six to choose from. I’ll perhaps revisit in a few weeks, but all soup roads lead to next Monday’s grand opening of Union of Genius, on Forrest Road.

Three busy roll makers, along with a dedicated soup ladler, dealt with the queue efficiently. I opted for my go-to hangover buster (I was in Teuchters, last night) of ham, egg mayo and salad. 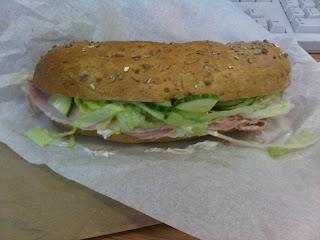 Generous spoons of good, chunky egg mayo were spread across the roll, joined by a nice slice of ham, then topped with lettuce and cucumber. I devoured the thing with remarkably little mess. It was hearty, filling and comforting, and set me up nicely for an afternoon of careful pondering of the wonders of the information age.

At £3.50 it was maybe a little pricey, but given its location they could probably charge more and people would still keep coming back.

Overall, I enjoyed my little stop at The Square. If you’re in the neighbourhood and looking for lunchtime fodder, I’d recommend you pop in and order a nice roll from their impressively stocked deli counter. I’ll get back to you, in a few weeks, to tell you if their soup is worth invesigating, too 😉

I drank: Nothing (I’d had a cuppa, shortly before lunch)