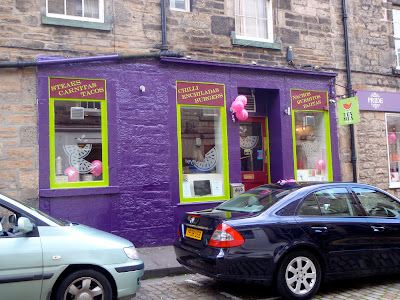 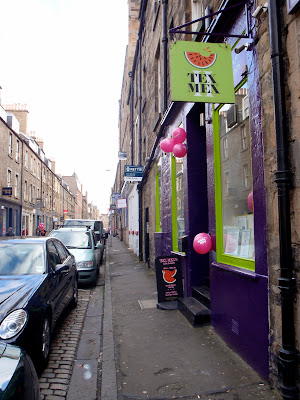 Blythe’s Verdict
You could have a lot of fun just eating lunch on Thistle Street. As I walked along to Tex Mex, I was reminded once more of all the good places in the little stretch of New Town side street. It reminded me, as we walked past Dusit, that we still haven’t been for a Thai meal, as yet, so we need to rectify that oversight, swiftly.

I digress. I’d heard a lot about about Tex Mex, over the past wee while, not least from the amusing Twitter feed of the owner, @fatdonny. So I was very optimistic that we’d be in for a treat, as I gently promenaded past Henderson’s. LQ: Istanbul’s Patrick was coming from the opposite direction, and we arrived simultaneously. We were soon joined by the excellent MJ, ever diligent in her photographing of the exterior of the place, before she stepped inside.

Tex Mex is compact. It holds somewhere around 35 folk in a space you’d never think would quite manage it. It somehow manages not to feel too cramped, though. We were greeted by a friendly and efficient waiter, who seemed to gain speed as the place filled up (to full, by the back of 1pm), without losing composure.

Given MJ’s southern heritage, I think she came with a boat-load of expectations about this place. She’ll tell you herself, but she was not optimistic about being served a meal that would meet her exacting standards. I personally found it something of a joy to watch her pessimism melt away like an ice-cube on a sizzling hot-plate.

I opted for the soup (shock), which today was tomato and pepper.

What arrived wasn’t so much a soup as a bowl of thick, hearty dip, which I was invited to eat with a spoon, as well as with the accompanying tortilla strips. It was a good dish, not too cloyingly sweet like pepper and tomato soup can often be, but it was too thick a concoction to be considered a soup.

For our main courses, Patrick chose the shredded beef enchiladas, which looked excellent.

MJ trumped us all with her sizzling vegetable fajita platter, which our waiter thoughtfully set fire too, before our very eyes. It was pleasing lunchtime theatre.

I had opted for something called carnitas con guacamole, which was slow roasted pork, served with the usual mix of salsa, guacamole, and sour cream, a little salad, plus tortillas, for assembly in to lovely combos for jamming faceward.

As is often (always) the case, I was turned out in full suited , so I opted to knife-and-fork it with my assemblage, but realise this is total heresy. I’m a messy eater at the best of times, so thought I’d spare my dry cleaner the agony of dealing with this particular spicy spattering.

Whatever the case, my dish was excellent. The pork was fall-apart tender, the accompaniments right on the money, and the addition of Fat Donny’s homemade hot sauce topped the dish of very nicely. The portion size was very generous. I’m a “leave the plates clean” kind of guy, but I was just a little defeated, this time.

A nice pot of cafetiere coffee brought the meal to a lovely conclusion. All that was left was for us to pay the bill, me to lose MJ’s pen, then off in to the sunset for another lovely Friday, Friday lunch quest.

Overall, I was extremely impressed by Tex Mex. I’ve eaten in some but not all of the places offering similar cuisine in the town. From my experience, this place is miles ahead. I’d heartily recommend that you check it out, next time the mood takes you. 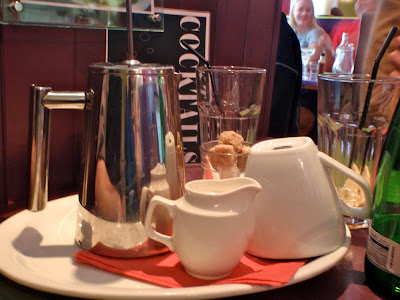 I admit, (Ok, I feel like I am admitting a lot these days in regards to foodie stuff) aside from really not liking fussy French food, I also have a hard line against Mexican food outside of the States, or Mexico. I mean, have you had a Mexican meal in the south of the States? It’s better than the food I had in Mexico itself! So I strenuously avoid Tex-mex places and burrito places in the UK cause they usually only make me angry and sad.
I say all this to tell you the mind set I has when I booked it over from the University to meet B and Patrick for lunch at Tex-Mex. I was fully prepared to be sorely disappointed. And with that healthy attitude, I went into the purple painted building on Thistle Street.
The place was small, with only seats for 30 people or so. I was glad B booked us a table. I sat down and told them of my aversion to Mexican food not prepared by Mexicans and I promptly ordered my standard order: Fajitas.
One thing that really made me question the way the food would be prepared was the inclusion of cheese in the description of the fajitas. I mean, sure, cheese comes on the side, with the sour cream and guacamole, but how did the cheese fit into the main bit? But there it was, nestled between the butternut squash and peppers. Doesn’t cheese melt when it hits the hot skillet? Wouldn’t it be a huge mess? I was confused, but B said to go for it. I had to remind him that the enjoyment of my entire meal could be ruined if it came smeared with cheese. Just then the waiter approached. I asked him what sort of cheese it was and how it could be in the skillet. He just said, “you don’t like it, we can do it without it.” He was so friendly about it that I said yes and he was gone in a flash…having never answered my original question.
Soon after, B & Patrick’s starters arrived. The soup was thick…more like a dip for the toasted tortillas that came alongside. The spoon could almost stand up in it-thick. But B said it was tasty nonetheless. Patrick’s Crab Flautas came with a beautiful salad. Colourful and lovely, not that he tried it. He was too busy tucking in to the soft shell crab stuffed corn tortillas, his concensus was that why would you not deep fry a soft shell crab, when that was when they were at their best? And why not use a cheaper crab if you are going to stuff it inside a tortilla and smother it with cheese and sauce?
Then the main arrived. B’s carnitas were more wet than I generally consider carnitas to be served, but they looked good enough. And Patrick’s shredded beef enchiladas looked like a lot of the enchiladas I remember, but in a nice single-serving size (which, is HUGE, by the way).
Then the theatre of my fajitas. The sizzling skillet, the smoke, the accompaniments! It was all grand. The fajitas themselves looked fresh and tasted good. Not over-loaded with flavour, but it was ok like that (with all the things to jazz it up). The real star of the show, for me, was the flour tortillas. They were all different sizes, with various grill marks. I am not sure if Tex-Mex II buys them or makes them in the back, but they were filled with flavour on their own, and made the standard supermarket variety pale in shameful comparison.
The salsa was delicious. It was fresh and well made without being overly seasoned and it was quite good with a bit of the house hot sauce rolled up in a perfect flour tortilla.
It was good. It was the best tex-mex/Mexican food I’ve had outside of the States, which says a lot.
The only thing that made me laugh about the whole experience was the pictures of the hot sauce challenge on the wall with people (Brits, presumably) that couldn’t handle a spoonful of the house hot sauce… whereas, I thought it was mild, but that could just be my roots kicking in. (this just in) Nope! Apparently, I was wrong in my view of the photos, these were some crazy people trying to eat a spoonful of the truly hot stuff they keep out of the hands of wayward customers. (It’s a 750,000 Scoville rating sauce-I think I should go back and try it)