I have something of a shameful admission to make. Susan from the Hula Juice Bar dropped me a tweet to come and visit them when we first started out on our merry questing ways, just a few short months ago. For one reason or another, it just didn’t quite happen. When she dropped me another tweet, yesterday, to say that today’s soup would be haggis, neep, and tattie, she had me firmly signed up to the project.

As I left my office, which is around a 15 minute walk from Hula’s Victoria Street residence, the rain had just begun to tinkle down, gently. I was clad in my overcoat (which was keeping me way too warm, on this uncharacteristically mild day), but had neglected further rain , such as a bonnet or brolly. I had visions of turning up at Hula, soaked to the skin, to find out they’d run out of soup. In Angus’s terms, I was wearing a metaphorical black hat, but metaphorical hat’s do not keep the rain off, sadly.

As I promenaded up the Bridges, a wonderful thing happened: it stopped raining. The sun didn’t come out, nor did I burst in to song, but it was still a joyous moment. 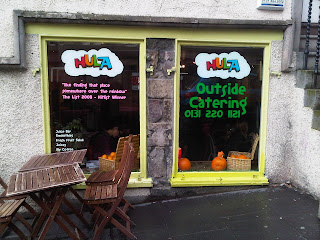 I was soon at the Hula’s welcoming door. I walked in and made my introductions. Unfortunately, I couldn’t tarry for a sit-down lunch, today, so took Susan’s recommendation, opting for their takeaway meal deal. This meant I could sample the much vaunted soup, along with a Cajun chicken wrap (again on Susan’s recommendation), for the princely sum of £4. 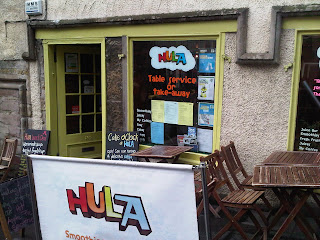 As I waited for my wrap to be toasted, in the sunny surroundings of their compact little café, Susan offered me a little sample of their famous “juice”. Now, I’m not a fan of these things, but the banana and mango lassi was very nice. Maybe if I thought of it as chilled fruit soup it would make more sense to me.

My victuals were packed up for me in compostable containers and bags, much like yesterday, and with friendly farewells ringing on my ears, I toddled off back to the office. 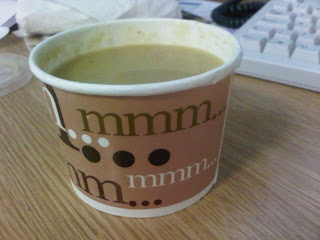 When I got there, I tucked in to the soup. It was very good, with an excellent full flavour from the haggis, and pleasingly light creaminess from the potatoes. The wrap was similarly excellent, with the spicing offering a welcoming cuddly warmth rather than a brutal slap of one-dimensional heat. It was balanced, filling, and enjoyable. 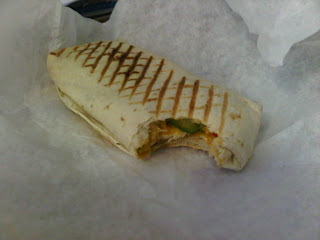 Overall, I have to say that I’m very sorry for not popping along to the Hula Juice Bar before now. It truly is a little ray of sunshine, twinkling at the corner of the Grassmarket (my mixed metaphors show no signs of improvement, I think you’ll agree). It’s always such a delight to see people enjoying what they’re doing at the same time as producing things to a high quality. I’ll be back to try more soups and wraps from their range, soon.

I wore: That lemony yellow and blue tie that I used to wear all the time

I drank: A wee sample of banana and mango lassi