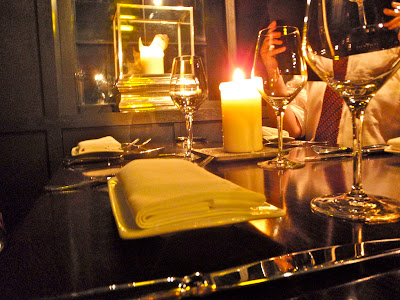 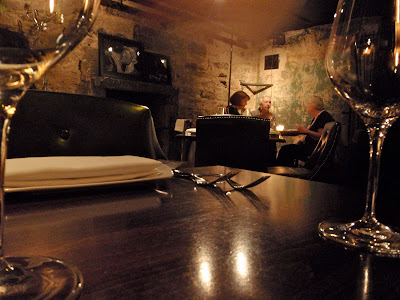 When I showed up to the Oz Bar (which I called the O2 bar), B and my flatmate were already there, chatting over drinks. It was warm and I had spent the last few hours sitting in the sun in the Meadows. It promised to be a good night. We moved over to Divino Enoteca and descended the stairs into a beautiful space that was a mix of stylish black chairs and sleek tables and rough-faced stone walls. We were warmly greeted as we gazed at the chef in the semi-open kitchen as we made our way to our table.
As you would expect, the wine menu is extensive. Pages and pages of wines ranging from £5.00 per glass to around £880.00 per bottle. The food menu, however, was a single sheet, supplemented by a list of three daily specials.
The menu looked good, simple and fresh. I, of course, had to try to confuse our server as much as possible by asking if the Trofie pasta with monkfish, shaved pecorino cheese, cherry tomatoes and white wine sauce was a cream-based dish. I don’t like creamy dishes; I’m odd; I know that. But, the sheer confused look on his face made me want to take it back and order the special gnocchi instead. But I was in luck. The dish was cream free and it was ordered immediately!
Instead of a starter, I opted for a small basket of their homemade sourdough bread with olive oil and 10 year old balsamic vinegar. Three of us also opted for the £13.00 wine : 5 glasses of wine, 2 whites, 1 light red, and 2 reds, all 50ml each.
The wine arrived first. They brought an extra end table to place K and my glasses on. Each ‘flight’ came with a wee placemat that told us where each wine came from, who bottled it and what grape it was, along with other fact like alcohol content and such. Then the starters arrived. My and R’s bread was nice. It wasn’t quite the same standard as somewhere like Peter’s Yard, but that is to be expected, they have a master baker who does their work in store. But the thing that disappointed me was the dip. I know that 10 year old balsamic vinegar is expensive, I know it is good, therefore I want to taste it. The vinegar came as a half a teaspoon of vinegar submerged in an inch of olive oil. I tried mixing. I tried dipping heavily. I tried lots of things to get to it. To see if really was as good as the bottles we bought in Rome and Florence, but I never could and just had to give up.
I tasted the Bresaola beef carpaccio on a bed of rocket, funghi champignon and aged Parmigiano Reggiano shaving, and I will say that it was very good. The flavours and textures mixed wonderfully on the tongue. But, I didn’t have food envy.
Our mains arrived in good time and we stopped the chatter about the wines and faking our pretentious knowledge (something about a deciduous and sappy wine comes to mind). K and I both got the pasta dish and found it rather bland. In fact, against what we like to do, we asked for salt and pepper, which did help massively. The fish was ok, maybe a bit overcooked, and the tiny chunks of monkfish felt a bit stingy, but it was entirely edible, and ate we did.
My flatmate fared better, her order of Baked fillets of sea bass seasoned with fresh herbs served with a julienne of seasonal vegetables looked delicious and she said it was nice, but ‘didn’t blow her socks off’.
After dinner, we didn’t bother seeing a dessert menu, but flipped through the pages of the long wine list until the waiter returned and K suddenly and ordered us a bottle of for the table. It was good. No idea what the cost was, but it must have been a pretty penny. Each of us paid around £40.00 for dinner and drinks.
Over all. I was well impressed with the wine and their huge list and the reasonably priced flights. The atmosphere, was great, but the food, sadly let them down. Don’t get me wrong. I’ll go back. I’ll go back quite soon, but it will only be to have a starter, some snacks and lots of wine.

‪‬‪Blythe’s Verdict‬
‪‬Divino is a super-chic wine bar from the lovely folks who brought you such Edinburgh staples as Vittoria and La Favorita. I’d visited a couple of times for drinks, previously, and been bowled over by the place. The interior is all dark wood and plush leather. And it has a lovely little outside terrace, which is the perfect place for a cigarette, for those who still partake.

So, I was filled with optimism, when we arrived. We were greeted very warmly and shown to our table.

The menus, both food and wine, took a lot of thinking. The magnificent list of wines is splendidly dumbfounding. I found myself aimlessly flicking through it on at least three occasions, without taking in a single word of its majesty. I don’t think I was alone in that pursuit. The food menu read beautifully, too. The starter options, in particular, made joyful reading and posed quite a set of posers.

We eventually bit the bullet, and ploughed in. MJ, Kathryn and I opted to take a little mixed “wine “, with Rachel showing admirable discernment and restraint in settling upon a glass of a bold-looking red. Rachel and MJ opted for a simple starter of bread. Kathryn went for some bresaola carpaccio (Lunch Quest: Istanbul’s Mina would have approved) and I settled upon my all-time favourite dish, alla Parmigiana.

Oh, the horror! It was easily and unquestionably the worst with which I’ve ever been presented. The dish is rarely a looker, but can often be made to look very presentable. Often, it is served straight from the oven and is akin to chowing-down on lava. In the case of this dish, it was not bonnie and decidedly lukewarm.

Its relative coolness could have counted in its favour, if it had allowed me to appreciate some depths of flavour or subtle seasoning that spoke of thoughtful preparation. Instead, all I was confronted with was a rawness that spoke of too much tomato puree and not enough care and attention. It was incredibly poor and should never have been released from the kitchen in to the wild.

My risotto main course was pretty fair, which was a welcome relief. The rice was a little underdone, but the flavour was good, with the rich smokiness of the scamorza always likely to be a winner with me.

But there was no getting things back after that horridly inauspicious start.

Overall, Divino is a first rate wine bar. It’s an absolute gem and is going to be a winner on the Edinburgh scene for years to come. However, they have a big decision to make. As it stands, the restaurant is woefully poor. It’s a disgrace to the setting. They could go two ways with it: try to radically improve things; or focus on being a wine bar that offers high quality nibbling platters and the like. If I were them, I’d opt for the latter.

For now, I’d encourage you to visit, as the wine is spectacular and the setting just lovely. But I’d heartily recommend that you pop somewhere else for dinner, first.