Cucina is super-stylish, as you would expect from the restaurant at Missoni’s palace of uber-chic on George Iv Bridge. I was warmly greeted upon making my way upstairs to the restaurant, and I was swiftly shown to our table. 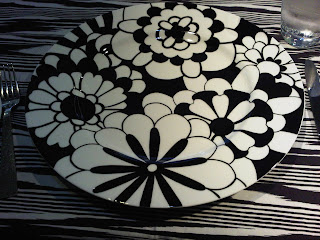 I had arrived with MJ-style promptness, given I was on photo duty, and was surprised to find the place largely empty. I’m not sure Monday lunchtime is the most popular time for lunching, although with so many of the upper-scale places closed on a Monday, I thought a few more punters might have been lured in to join us, today. 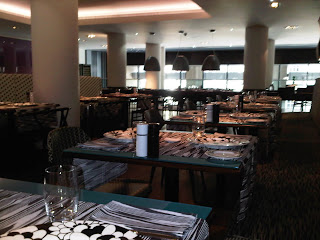 LQ: Istanbul bureau chiefs Mina and Patrick were due to arrive with guest of honour Trish, who was visiting from Inverness. In the meantime, I had some options to consider: the extensive a la carte menu offered a wide range of choices; but the smaller lunch menu offered five choices each for starter and main, and looked good value.

The Mina’s general reluctance to adhere even the most basic rules of timekeeping meant that I was sitting waiting for quite a while, but when they finally pitched up, thirty minutes late (shocking!), there was much hilarity in the air. Patrick looked in bad shape after last night’s trip to Sygn, but Mina and Trish looked the picture of health, and gently radiated warmth and wellbeing. 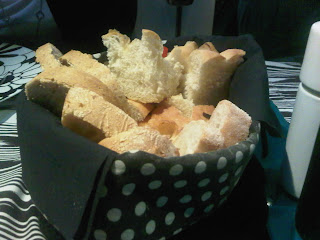 And so to business! A lovely bread basket arrived in what appeared to be Mussolini’s hat (it had been offered while I waited) and our thoughts quickly crystallised around a suite of dishes. I opted for the Caserecci alla tre cipolle (homemade twist pasta in three onion sauce), followed by the riso. My fellow diners opted for brown shrimp salad followed by coley (Mina), the chicken (Trish), and mussels followed by the chicken (Patrick). 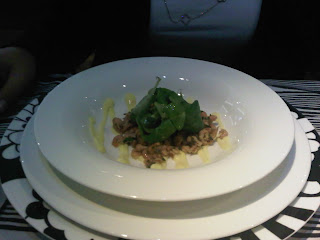 The dishes quickly arrived, and after pausing for photos, and for the waiter to give us a very detailed description of what we were about to eat, we tucked in. Patrick seemed pretty pleased with his mussels, and Mina was complimentary about the salad, although perhaps less a fan of the brown shrimps than the salad leaves. My dish eluded me, I must admit. The pasta was good although not outstanding, and the three onion (red onion, leek, and chive) sauce, combined with a few slices of fresh tomato didn’t really do anything for me. The fresh parmesan, grated on top by our waiter, was outstanding, but when a little cheese topping is the most memorable thing about a dish, there must be something not quite right. 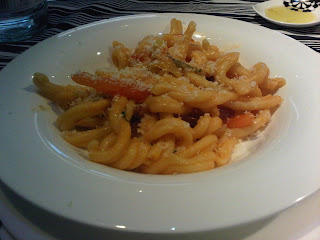 The main courses arrived. This time, our loquacious waiter from the starters was otherwise occupied, so we were allowed to proceed without a full description of our dishes. I was pretty pleased with how my choice compared to the others on offer. It looked neat and tidy, and the rice cakes looked appetizing, once I removed the greenery on top of them. But looks can be deceiving. The dish was like a depth charge; quite the heaviest thing I’ve had to contend with for a good while. It was incredibly greasy, as well. The cubes of seasonal celeriac had good flavour, but ranged from rock hard to squishy soft. The mushrooms were probably the highlight, but they too suffered from being a little too greasy. It wasn’t a case of the dish having been over-dressed with olive oil; simply that too much of what the rice cakes had been fried in made its way on to the plate. Basically, it was a massively disappointing dish. 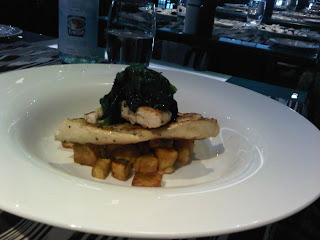 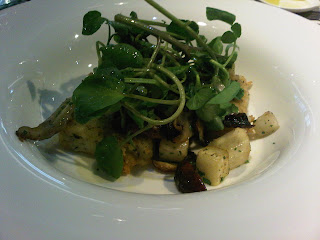 In terms of service, the three waiting staff, whilst all very good, approached their tasks in very different ways. This lent to my nagging feeling that this place was freshly opened and lacking a coherent approach to dealing with their customers, which is just weird given has been open for a good while, now. They’re aiming for high-end service, but can’t hope to achieve that without everyone pulling in the same direction. 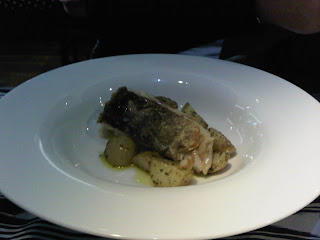 We rounded things out with teas and coffees, and some apricot jelly petit fours that were crammed with sweet flavour, quite over-powering to end a meal, but at least a reasonable high-note on which to end.

Overall, Cucina at Missoni delivers stylish dishes, but not the quality to match the elegance. The menu has some good ideas and some dishes that sound enticing, but suffers in terms of execution. There are many better Italian restaurants in Edinburgh, so I won’t be rushing back there, any time soon.