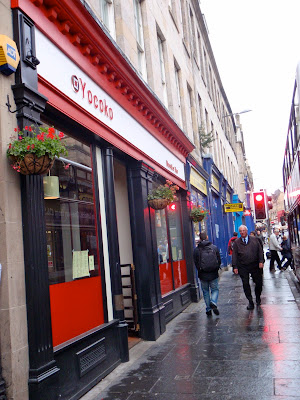 Blythe’s Verdict
In the far off distant days of my misspent youth, I was introduced to the noodle bar concept in a lovely little place next to the Cutty Sark, in Greenwich, rather close to where I was born. Since then, it’s a style of place I’ve visited from time to time, most recently in a couple of places in Glasgow. Of course, we sampled the concept of quick, simple, reasonably priced Chinese cuisine at Chop Chop, a few weeks ago. Yocoko approaches things from a different perspective, seeking to reflect a broader range of cuisines from the region. 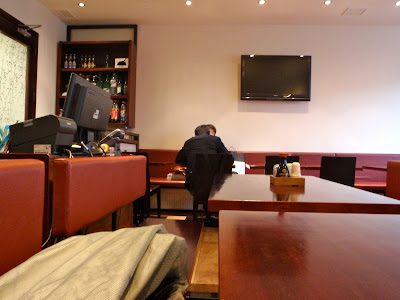 I really liked the simplicity of their layout. We sat at one of the booth-style tables in the middle of the restaurant. Service was quick and simple. The menus were well layed-out, informative, and contained a range of food that I wanted to eat. 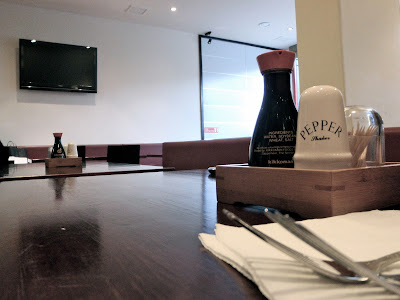 Initially, MJ and I were both drawn to the same dish in the soupy noodles section, and for a moment I thought another of our legendary sword fights was going to be necessary to settle matters, but I was soon distracted by the prospect of “dry” Singapore noodles. MJ helpfully pointed out that this sounded like a dish that I was more likely to actually eat, rather than simply play with for an hour like I’d done with the noodles in Chop Chop. Slowly but surely, she’s starting to get to know me 😉 I ordered some spring rolls as well, for a light starter.

The spring rolls arrived quickly, served in a rather strange little red dish, with a sweet chilli dip. They were piping hot, crisp, and flavour-filled, so ticked the box very nicely. The dip was fairly meh, but this was a promising enough start.

When the main courses arrived, we enjoyed a very pleasing game of roll reversal, as MJ had some serious playing to do with her soupy noodles. My dish was a straightforward pick and shovel plate: pick at the interesting bits; shovel the rest into my expectant face. The dish had good flavour, a pleasing whisper of chilli heat, and enough strips and chunks of meat to keep my palate interested. It also looked a whole lot nicer than the spring rolls, in terms of how it was presented on the plate. 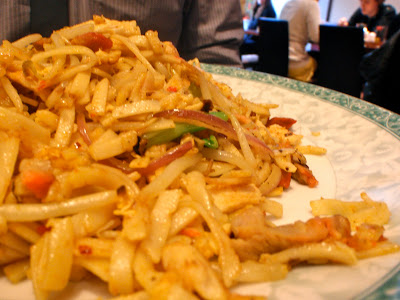 Overall, I liked Yocoko. It accurately executes dishes, provides interesting plates of sustenance, and does so with an understated style. I’d go back and I’d even take people there, particularly if they’re looking for a fast plate of tasty grub.

Today the weather was less than promising as I hopped off the bus and walked the few feet down to , a mix of Asian backgrounds on a single menu (personally, I think that should be the slogan). Inside was light and airy with the large windows letting in the light from the street, but not the noise and bustle of the many students that have descended on the city.
The simple décor and the tables that remind me of communal dining, while keeping individual tables. The menu was extensive, and once I reminded B that he probably shouldn’t get a noodle soup if he wanted to eat lunch and not play, we were ready to order. I am not a vegetarian. I have nothing against it, but I’m just not one. That being said, I opted for the vegetarian noodle soup with some form of large, flat rice noodles that turned out to be better in theory than practice. Why? Simple, because it was more expensive than the chicken noodle soup. And, I figured that if the veggie option was more expensive, then it must have some intrinsic value or high quality ingredients.
After I failed at taking up close photos of the contents of B’s spring roles, our mains arrived. Mine was huge. Huge enough to remind me of a luxury swimming pool for a mouse. 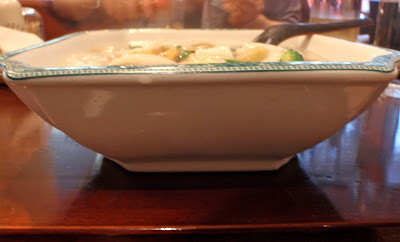 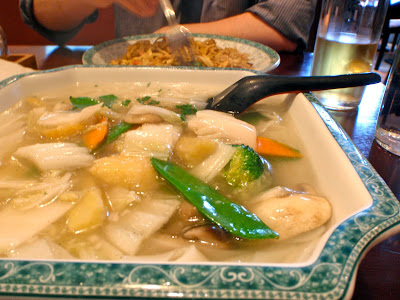 Regardless, I dug in. It was hot. The veggies on top were good, still crisp and the soup itself was nice, if a tad salty. The noodles were pretty bland when the soup first arrived, but they eventually soaked up some soup-goodness and became more flavourful. I barely made a dent. Simply too much food. But for less than a fiver, it was a great deal.
After we sat and caught up, I went away to my office, where, hours later, I could still feel the msg (or salt) still swirling in my veins.