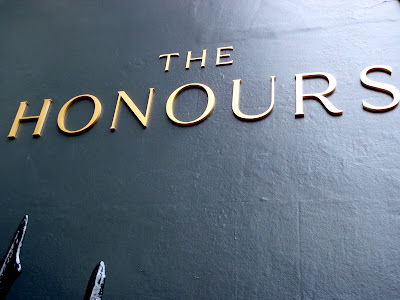 Today B (also known as PDB, whenever I feel the notion to call him such, and in our last review of Amarone…with that tie, I did) and I went to the Honours to sample the much lauded and long-booked lunch. When we arrived we were whisked to our table and they politely took my coat and handed us menus, which were quite large, and comprehensive. B and I perused the offerings while we contemplated the joy of the re-mix of Rebecca Black’s Friday and we both agreed that with the set lunch menu, we would have done better to have booked for a Tuesday or Wed. Something about the chicken legs and potatoes didn’t sound fantastic to us, but having seen them served to others in the restaurant, I will say that they did look tasty.
I decided on the caponata and the poached fillet of sea bream and it was no time before our lovely waitress brought out a bottle of sparkling water and soon after brought us a pen holder of pointy bread, which had exactly two slices of thin, long seeded bread and two of what looked to be sourdough; these came with a bit of butter served on a slate coaster. Though, I have to admit that once B mentioned the ostrich eggs we needed for our soldiers, I was slightly hoping that they would come with the starters.
The starters arrived in good time and my caponata of aubergine, red peppers, tomatoes, capers, pine nuts, and raisins was nice. The richness of the balsamic around the edges and the wee slices of thin-sliced toasted bread was a bit of crunch that elevated the dish. The only thing I wondered was whether a bit of citrus to cut the richness would have helped. My mouth is still debating this.
Brown soup with a slightly less brown foam on top doesn’t do it for me, and didn’t for B either. He was not impressed; I don’t usually go for brown-coloured soups, so I blame him entirely.
Not too long after our plates were cleared away and our water refilled by our waitress, our mains arrived. My poached fillet of sea bream with peas & onion à la Française, coriander & mint mousseline was pretty. The sweetness of the peas went well with the savoury elements in the sea bream and, even though I generally do not like sauces that remind me of hollandaise type things, it was tasty, with just enough sharpness that it married well with the dish as a whole.
The espresso was, however, some of the best I’ve had so far on our lunchquest.
In total, I’m glad I went. The food was good and the service was impeccable, but it’s not somewhere I’ll have as my go-to restaurant for lunch.
Blythe’s Verdict
I must admit that I’ve had very little exposure to Martin Wishart’s previous work. I enjoyed a couple of dinners when he was supervising things in the final death throes of The Hallion’s restaurant. I was impressed, but as was usually the case when I was on the premises of that particular fabulous folly, I was inordinately drunk before dinner had even commenced. I’m well aware of his lofty reputation, and having read Sarah from Cake Quest’s effusive praise for this place in her guest review, last month, it seemed likely we were in for a treat.
The Honours is chic and stylish, with crisp lines and a modern aspect. The staff are similarly tailored, and there’s quite the profusion of them. They are attentive and helpful.
We were immediately shown to our table, in the main dining room. The table and mats reminded us very much of our friends’ old flat, which is a very good thing as we enjoyed many happy meals (although no Happy Meals) in that location, and you can probably trace the origins of Lunch Quest back to that place, ultimately. 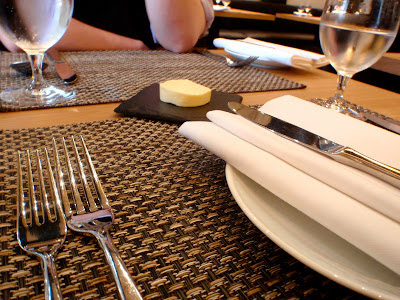 The menu is large, both in terms of size and in terms of options. It was a little overwhelming, actually, and required thinking caps to be donned. I eventually settled upon the foamy wild mushroom bouillon to start, then opted for the halibut rather than the John Dory, on the recommendation of the waitress.
Very pointy bread was delivered. I secretly hoped this was the prelude to the arrival of a soft-boiled dinosaur or ostrich egg, for which the pointy bread would have made ideal soldiers, but alas it was not to be. That particular food fantasy will need to be pursued another day.
I think it’s fair to say that foam tends to polarise views: some consider it pointless chefiness; some find it a delight. Having sampled many excellent foam-finished dishes (particularly the cauliflower soup with a parmesan foam) at The Bonham, I’m something of a convert. With my bouillon, the foam was definitely the star, but sadly the rest of the dish was extremely disappointing. The dish was dramatically over-seasoned, and the corn lurking in the soup’s depths did nothing improve matters.
I love soup. I make it all the time (with sporadic success) and I eat it in cafes and restaurants all the time. This soup was not a good example of the art-form. I sought solace in the pointy bread, which was very nice.
Our main courses quickly arrived. It was now very noticeable that the restaurant was extremely busy. The staff remained well on top of service, throughout.
My halibut was a significant improvement on my starter. The halibut was served on a bed of mash, with lentils and chorizo scattered across the plate with relaxed artistry. The fish was accurately cooked, enhanced nicely by the flavour-packed chorizo morsels, and the dish came together in to satisfying mouthfuls.
I sampled a little of MJ’s sea bream and liked how the fish combined with the freshness of the peas.
We considered desserts, but as is the norm settled upon espressos. The coffee was very good, probably the highlight for me. I’m not averse to the notion of coffee being the highlight of a lunch, but I’d rather it was the perfect cherry-on-the-top, rather than the single outstanding item.
Overall, there’s little doubt that for the next few months The Honours will be the place to take people you’re seeking to impress. People will be impressed, as there’s a lot to admire in the design and the service. However, if you’re looking for somewhere that’s going to offer you genuinely memorable dishes, I’m not sure this is the place.
Scores on the Doors