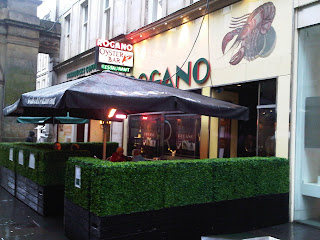 Rogano is a veritable Glasgow institution, showcasing the fruits of the sea as their speciality. I was introduced to it many years ago and it has been a regular stop-off point on my previously regular trips to the west. I stopped in on my road back to Edinburgh from even further west, so can just about justify including this on the Edinburgh site, rather than as a Roving Reporter post. 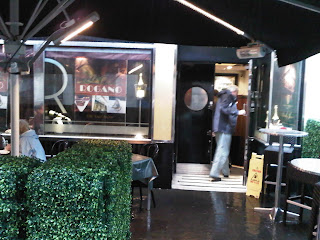 Rogano radiates old-style elegance, with plush decor and an array of scantily clad maritime beauties bedecking the walls. Its art deco stylings transport you back to a more innocent time, and with the soundtrack to match, you wouldn’t be alarmed to run in to characters from Fitzgerald or even Wodehouse, out to mangle a spot of lunch. 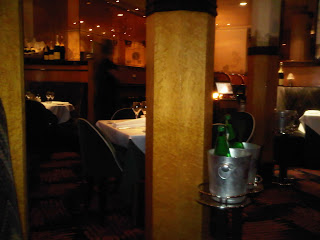 I started with their soup of the day, a creamy celeriac and mushroom. This was thick, hearty goodness, easily the best soup I’ve sampled on our quests, so far. The garnishing mushrooms were packed with flavour, giving lovely bursts of nuttiness. A bread waiter provided a selection of tomato, olive, cheese, or onion rolls, from which I sampled the latter two. They were both extremely good, very well judged and not overpowering on their respective flavours, allowing the well-textured bread to remain the focal point. 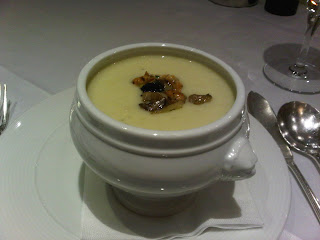 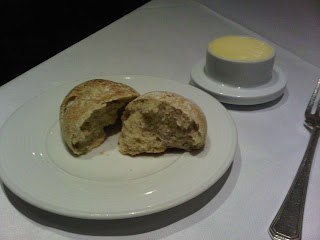 Next came the house special bouillabaise. Fish stew is one of the only main course dishes with which I’m really confident. Indeed, MJ regularly cooks my recipe to impress her friends 😉 I’d associate a bouillabaise with a much thinner broth – this was definitely what I’d class as a fish stew, but no matter. It was crammed full of fish, with salmon, white fish, mussels and prawns. It had an intense fruitiness, almost verging upon hints of a north African sultana sweetness. It had crunch from neatness diced veg. The only weak point was a couple of crostini topped with an overly garlicky marie rose sauce. These were un-cuttably solid, so had to be bitten in half. The dish could have lived without them. 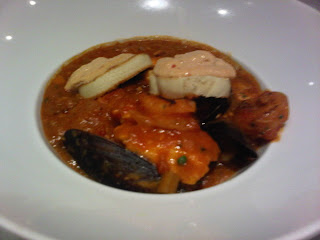 Good espresso followed, then it was time for the bill and a return to the grim reality of the Glasgow weather. But no – petit fours arrived, with another espresso. Had my constant photo taking tipped my hand as a food reviewer, perhaps? 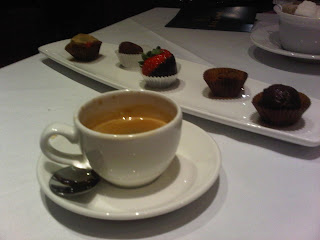 Overall, Rogano is a style icon and a damn fine lunch spot. It provided me with two dishes that I love to cook and love to eat, and I enjoyed them both, muchly. I could happily have remained sitting there all afternoon, gently soaking in the sounds of South Pacific and sipping a nice crisp glass of something bubbly. The service was spot on, particularly given I was a lone diner on this occasion, and I’m sure to be back. I may even bring MJ, as I think she’d really like the place.

I was: the devil in pinstripes.

I ate: celeriac and mushroom soup, bouillabaise, one of the petit fours (not that I really like dessert).