While MJ is away smashing Champagne into the stern of the good ship HMS Lunch Quest: London, I went on a sneaky little quest to Spoon, on Nicholson Street. Little did I know that my mother, Anne, would be awaiting my arrival, along with the expected array of questers, including Cake Quest’s editor-in-chief, Sarah. My mother joined us for a quick cuppa, prior to heading off to her latest Fringe show.

Now, it’s been a fair while since I’ve been to Spoon. My last visit was probably towards the end of its tenure as Nicholson’s. For sure, it has changed a good deal, and what I remember as a sleepy hideaway is now a very vibrant, busy place, although that is, I guess, partly down to it being August. And then there’s the Harry Potter associations, as well…

To start, a note on the service: it was not good. However, that wasn’t in any part down to any lack of effort on the part of the staff, who seemed frenetically committed to their tasks. They simply had a very busy lunchtime service to deal with, and too many plates to keep spinning. The service was “August in the Festival City” – I’m sure it’s fine at other times.

From a wide menu of options, we settled upon a wide range of dishes. I opted for the coley on a bed of herb potatoes. 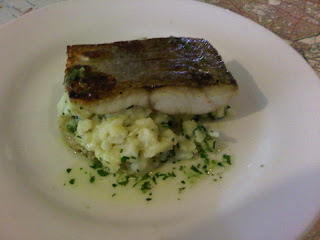 The dish was well presented, but the fish was over-seasoned to the point of tasting like it should be wrapped in newspaper and served with a sauce brun. The potatoes, in contrast, were under-seasoned and incredibly bland. Combining the two on a forkful didn’t even give pleasing results, as the intense saltiness killed everything else. The dish was crying out for something with a citrus bite to bring things together, but it was not to be.

I think my fellow diners fared a little better, so I guess I should perhaps write this off as bad ordering on my part. 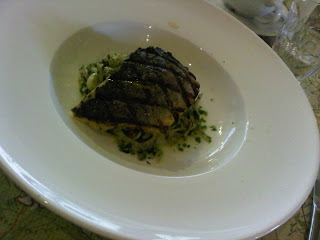 I’ve been to Spoon a few times, and have enjoyed light fishy lunches with chilled white wine in summer and heartier meaty treats with seasonal root crops in autumn and winter. A particularly memorable feast was my winter warmer negotiation of three fantastic courses – a terrine, lamb shank and clootie dumpling – washed down with tasty red wine while snow fell on gothic Edinburgh outside.

Happy times, hence my keenness to recommend Spoon for Lunch Questing delectation. Alas, I have to agree that, on this occasion, Blythe’s probably got it spot on with the staffing issues and Festival busyness. My sea bream on a limey, crunchy vegetable salad arrived with an unsightly smear of oil on the side of the plate. A rare oversight for Spoon which probably points to a kitchen under pressure (to be fair, all tables were full – of lunching celebs like ourselves, as well as a well-known comedian who will remain nameless, Josie Long.)

The bream itself was nicely cooked, firm and with a pleasant grilled roundness enhancing the natural flavour. It was a wee bit on the lukewarm side though. The limey salad contrasted well with the savoury fish.

And my glass of Sauvignon blanc was delicious – crisp, fresh and cold, like a mountain stream. But it arrived long after the bream had made its way downstream towards my stomach juices. Oh well, I’ll forgive Spoon – but will probably choose a winter meat feast for my next visit. 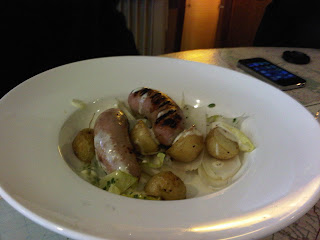 Spoon is a place I have frequented many times before, including many of the previous establishments situated in that particular geographical location (the all you can eat Chinese buffet may have been the low point). However, in the time that Spoon has been on the site of the former Nicolson’s Cafe, it has established a rep as a reliable lunch and dinner venue (with a decent sideline in cake – note of personal interest there). Great decor and an ever-evolving menu of tasty dishes mean that it often draws me in, especially in the summertime, as I tend to frequent that part of town more during August.

My choice was the skirt steak with anchovy and shallot butter. Skirt Steak gets a bum deal in this country, where it is viewed as a cheap cut and the fact that it is tougher than other bits of cow, mean some (inadequate) cooks steer well clear of it. This is one of the few areas where the French have actually got a point – they prize ‘Bavette’ and it is more readily found in french bistros and the like in this country. The cut is far more flavoursome, if handled correctly, than things like rib-eye. 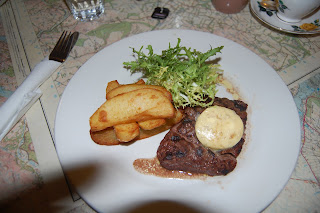 I was slightly nervous when the order was taken, as no cooking instructions were sought and I was dreading a plate of incinerated carcass arriving, but I was in luck. The steak arrived medium rare, but without a steak knife, a tool which would have helped with this cut. The butter was sharp and tasty and the meat oozed just enough blood when I cut into it. On the side was a tower of handcut chips which appeared to have been cooked in beef dripping (score 20 points), and some bitter green salad leaves (are tomatoes out of season?). So, good marks for the steak and chips, hold the so-called salad.

Blythe has already alluded to the festival service issues, something which haunts many great Edinburgh establishments during the frantic month of August. Don’t let it put you off – the staff were amiable, just very pushed during the lunchtime frenzy. Spoon is definitely worth an hour or so of your time.

So, a mixed set of views.

Overall, I’m willing to revisit Spoon, outside of festival time, to see whether I just caught them on a bad day. I could completely see how a hearty bowl of something or other on a wintry day, in this setting, would be great. It’s just a shame that today’s sheltering from the “summer rain” didn’t realise more joyous results.

I’ve been back to Spoon a couple of times since this review, and still can’t get to grips with it. I know it’s very well liked, but it’s just not for me. [BKR]