Blythe’s Verdict
I think we chose a pretty splendid opening venue for our glorious lunchtime questing. As the name suggests, with Tapa we’re in the land of Spanish-themed miniature portions, and what a pleasing array of items we had to nibble on. 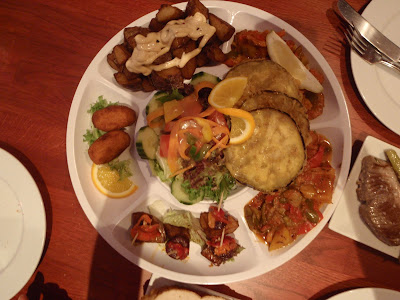 My instant feeling was that I wanted to wear the chef’s selection platter as a hat, then with the aid of an elaborately crafted system of ropes and pulleys munch away to my heart’s content on such classics as patatas bravas and paella. The little cheesy/chorizo croquettes were particularly flavour-packed.

Hat fantasies aside, the padron peppers were great, but there was something not quite right about the seared tuna. It was well enough prepared, but I expect tuna to have more of a punchy flavour.

Miriam’s Verdict
I would have to agree with Blythe that this was a delightful place to begin our lunch quest. I arrived a bit earlier than my cohorts and was seated in a cozy corner where I was presented with three menus and the host poured me a glass of cold water (without being asked, it is common practice in the States, but in the UK it seems to be just catching on). While I waited, I noticed that the decor was all dark wallpaper with beautiful mirrors to add to the size of the space, which could get a bit dark at night, or add to the mood, depending on what you’re going for. Aside from a mother and small child, we were also the youngest group in the place, not that that matters; indeed I hope that when I am older I regularly meet up with friends for midday tapas and sangria. 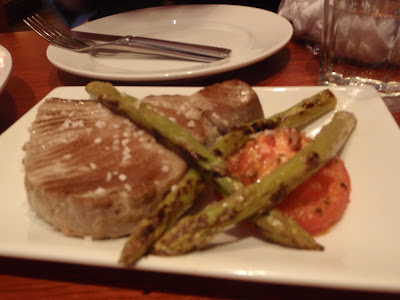 I’ve never had a server pour out a bottle of sparkling water like it was wine, and B and I agreed that it was definitely a good year for Highland Springs. We were served complimentary bread with olive oil which was ok, but seemed like a slice of tiger bread from one of the major stores up the street.

When the food arrived it was nicely arranged on a platter that reminded me of a dish we used to serve snacks in during university Superbowl parties. The platter came with a mixed salad with a honeyed dressing; aubergine crisps; patatas bravas; pisto manchego, roast veggies in a tomato sauce; chicken paella; chorizo and cheese croquettes; and a wee stack of potato, chorizo and a red pepper topping.

The chorizo, potato and pepper stack was a nice bite with a decent balance of strong flavor and the patatas bravas were well cooked and covered but could have been a bit warmer, but I put that down to what has to be the difficulty a kitchen might have of getting so many dishes ready at one time. I admittedly don’t like mayo, so I stayed clear of the spicy mayo on the potatoes. Likewise, I deigned to try the aubergine crisps, which looked well cooked and crisp, and the croquettes were shared by my two companions, but I was assured they were tasty deep-fried morsels. The roasted veggies were filled with tomato flavour, but seemed to lack that certain oomph. But the paella was deliciously moreish and I would have been happy sitting down to an entire meal just consisting of it. 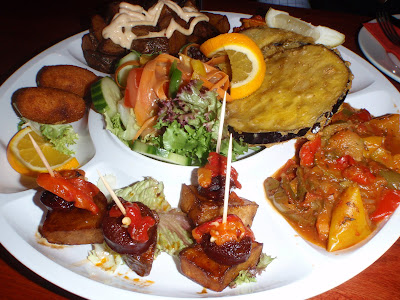 I have to agree with B that the tuna was a bit chilled and under seasoned, but the fried peppers (which were recommended to us by one of the servers) were delicious, simple and hit the spot. The only downside to the meal was the lack of a cooling substance. I suppose the salad on the platter would suffice, but the dressing was a bit too sweet for my purist salad tastes.

Overall, the service was lovely and the food was good and the sampler lunch platter is a good value for money. The staples of paella and chorizo dishes seem to be where Tapa shines, and if I am in the area and looking for a quick Spanish lunch, I’d happily go by again.