The Compass Group look to be going from strength to strength. Since their early days with Sygn and Monteith’s, they’ve progressed to the outstanding White Horse Seafood & Oyster Bar and now three branches of the Chop House steakhouse brand.

I visited their original branch in Leith shortly after it opened and wasn’t quite as taken with it as others, but recognised it was doing good things with quality Scotch beef.

I still haven’t made it to their Market Street branch but when a trip to the Church Hill Theatre demanded some pre-theatre dining, their recently-opened Bruntsfield branch was ideally placed.

I was joined by regular guest quester Iain who had spotted that given this was a Monday visit we had the benefit of £5 corkage on BYO wine, along with our early dining time meaning we could sample oysters at a reduced rate. We availed ourselves of both of these offers.

I picked up a very big shiraz from the excellent Cornelius which suited our purposes very well. The oysters- £1.50 per beastie instead of £2.50 – were a lovely, bright opener as we contemplated our menu choices. 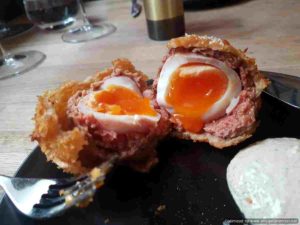 We also sipped a couple of cocktails. I was unconvinced by their Bone Dry (bone marrow) martini, but their Hanky Panky riff using cognac instead of gin as the base was excellent.

For starters were had the short rib scotch egg and their crab cakes. Both were delivered to a very pleasing standard, with the little aromatic shredded salad accompanying the crab cakes memorably good.

The steaks to follow – we both opted for rare ribeyes – were of good quality and really well seasoned. They were both unevenly cooked, though, with our initial attack points towards medium. We checked in with the staff and outlined that if we were blessed with more time I think they would have been sent back, as they weren’t right. They handled this very well and fed back to the kitchen.

The overcooking didn’t dramatically diminish the experience, though, as the charring of the steak and the seasoning were both on point.

Of the sides, the dripping fries didn’t really excite, the mushrooms were decent, but our waitress’ recommendation of the watercress salad was dead-on.

Someone once advised that a steakhouse should be judged on its salad. I think that’s an almost exclusively American paradigm, but by that yardstick Chop House matched up extremely well.

So overall, minor steak cooking issues aside, the Chop House Bruntsfield is doing very good work. It was amusing to be wearing trousers that matched their orange leather seats, for sure. All other aspects were delivered to a very high standard. Give it a look next time you’re fancying a steak in these parts.

Total bill: £92 (one steak was deducted from the bill)