May 24, 2018 cocktail bar, Kickstarter No Comments

I have a long-standing and continuing debate with various people in the food and drink industry about the lack of appreciation of the global success of our bars and bartenders in recent times.

In 2014, The Bon Vivant won the Spirited Award for Best International Restaurant Bar. IN THE WORLD. 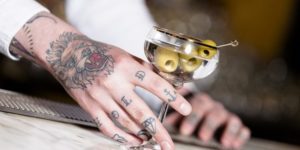 The classiest hands in the business

The embarrassing lack of recognition of this was only matched when earlier this year they won at the Class Awards for Best Restaurant Bar, with Bon Vivant Group’s drinks manager Will Cox given special recognition for having the UK’s classiest hands.

In 2017 alone, two Edinburgh bartenders won global cocktail competitions – Mike McGinty from Voyage of Buck at Patron Perfectionist and Jonathan Arthur from Bramble at Courvoiser’s Toast of Paris. Kaiko Tulloch, then of Lucky Liquor Co and now Panda & Sons, placed in the top five of the Olmeca Altos global final. This year we’ve already seen Leon Back from Panda & Sons compete with distinction at Bacardi World Class in Mexico.

And when it’s not people currently working in Edinburgh being recognised, like when Tom Walker won Bacardi World Class in 2014 or when Ryan Chetiyawardana won international bartender of the year 2015 (and every other global award he has won), you wonder where these people honed their skills. Oh wait, they both honed their skills working at Bramble. IN EDINBURGH.

Yet, there still seems a sense in which our globally lauded bars are somehow in the shadow of the restaurants that are highly rated in the likes of the Michelin Guide. This may speak of good PR on their part and a failure to match those successes by the bars, but there’s a sense that mainstream media are not listening or if they are they don’t really know what to listen for. And that tends to be where part of the continuing debate I mentioned focusses.

Toulouse from The Bon Vivant

Anyhoo, those working within the industry are well aware of the exceptional standards that our bars are setting and meeting, so recognise both that they need to do more to ensure sustained success but also to attract more people into the trade.

Aside from increasing technical skills and proficiency, it also has a strong focus on the wellbeing of people working in often highly-pressured environments.

Co-owners Jamie Shields and Martin Duffy view the Drinks Lab as the culmination of their experience delivering training at events around the country, now consolidated into one premises. They are well-respected industry legends with a clear drive to support the growth and development of things to the next level, whatever that might be.

The usual blend of weird and wonderful rewards are available to those keen to back the venture. I’ve signed up for a bespoke cocktail creation class which will lead to me developing a drink for the Backers’ Menu.

So that means you might get the chance to taste some god-awful shite that I think is wonderful and is probably near fatal. But only if you back the project, so get to it! You have until 8 June at 11.50am.