It has been a while in the making, but it’s finally time to reveal the most hotly debated topic in Edinburgh food & drink in 2017 – just where does the best coronation chicken in the city.

The list stands for itself but I wanted to pick out and mention just a few notable entries by way of context.

I’m extremely grateful to David Ramsden at The Dogs for taking up the cudgel on the challenge. The dish they produced as a little bespoke offering just for me made it all the way on to their lunch menu. And so it should have because it was super tasty. 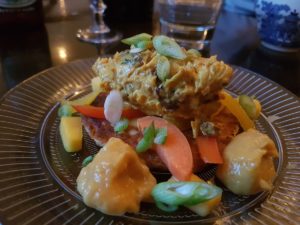 Coronation at The Dogs

Chameleon took a bit of a pasting in a recent review from my pal Gaby, but they did a mighty fine job of creating a coronation chicken scotch egg, so well done to them. It’s a place well worthy of your attention and a great stop during the festive party season.

My own entry into the charts comes with “Quoronation” – a version of the dish made with Quorn pieces. It ended up looking like cat food but it tasted a good deal better.

My friends at Union of Genius have been at the coronation game since their very inception so it was good to renew acquaintances with a great soup based on the dish.

I think the best overall coronation chicken available day-to-day is from Gannet & Guga. Aside from using deeply flavourful thigh meat, the flaked almonds in their recipe work beautifully.

But what can one say when one of the city’s best cocktail architects says he can top the lot? My feeling is you let Kin’s Sam Baxendale mix you the best coronation martini in the world. Replete with savoury gin, mango syrup and garam masalam tincture, this was a drink that deserved a crown. They’re based a 1 Barony Street, under Seasons. You should visit them soon.

Happy Bean’s hot grilled wrap with cashews was a surprise favourite and Lezzetli’s sandwich was definitely the best value.

Of the odd combos, Picnic Basket’s ‘Harry’ sandwich lost it with too much sweet chilli, and Let Me Eat Too had far too much cheese. It both cases this was a shame as the core chicken was very good. Pret’s coronation chickpea provided a vegan option but was a tough eat.

The Co-op illustrated that there’s something profoundly unappealing about supermarket coronation chicken. Sitting the raisins in goo for that length of time gives them a really odd texture and the overall effect of this dry-chickened glue pot was utterly awful. Waitrose showed they could do it just a notch worse so rightly bring up the rear.

So congratulations to the winner which is…well, click here to find out.