Macaroni pie – Twelve Triangles/Salt Horse
Served hot, served cold, with homemade chipotle ketchup or not, the macaroni pie crafted by Twelve Triangles and periodically available at Salt Horse is a pie of distinction and the finest thing I ate all year. 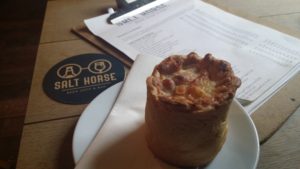 Halibut with scrambled eggs – Esben Holmboe Bang at Edinburgh Food Studio
Esben Holmboe Bang, head chef and owner of the three Michelin star Maaemo in Oslo, came to the Edinburgh Food Studio for a visit in October. He brought his take on what he’d cook at home using Scottish ingredients, with a multi-course feast that featured a fish course of halibut and scrambled eggs. It was other-wordly. It was as close to a flawlessly executed dish as I’ve been served on all quests. It’s only weakness was that it wasn’t a macaroni pie…

Korean cauliflower – Ninja Kitchen
One of the highlights of 2016 was the return of Team Ninja with the Ninja Kitchen at Bourbon. In a slightly unorthodox setting, their menu returned with signature gua bao augmented with a number of fresh new dishes including a truly fantastic Korean cauliflower. Presented as a lookalike for chicken wings, this was a vegetarian dream of a dish, with flavour explosions aplenty.

Powdered fois gras with black truffle on pistachio sponge and apple and spinach puree – The Table
The Table was our finest meal of 2016 and the best meal we’ve had on Lunchquest. The standout dish in a parade of excellence was the powdered fois gras pre-dessert that was rich and delicious, with black truffle topping and outstanding apple and spinach puree at its heart. It was a meal that I cried at the end of, and this is a dish that will always make me smile. All the emoshings…

Venison pie – Twelve Triangles Left Hand dinner at Salt Horse
Two pies from the same peeps in the top five! The pie is my food hero and I can rarely resist its charms, particularly when its made to a supreme standard as was the case this beauty. With venison shot just south of Edinburgh, the demon bakers of Twelve Triangles crafted a sharing beast to match the beers from Colorado’s Left Hand brewery at an event held right in the middle of the August Festival madness. It was an oasis of delicious, meaty calm in a desert of buffoonery.

Avocado toast with bacon from Hula

Roasted carrot salad – The Walnut
I never knew I liked carrots so much until The Walnut opened and successively made the case for the carrot as the best of the veg. Their carrot and black pepper soup was immediately adopted into my only regular cooking rotation. But it was their roasted carrot salad served with goat’s cheese that became the dish that lodged itself in my culinary memory.

Bread – J.E.F
In 2016, Edinburgh lost its shit about how good Norn was, with their bread and butter attracting particularly effusive praise. On a trip to Gent during September, I found a restaurant in a very similar style serving things to a hugely more impressive standard. The bread at J.E.F was easily the best I’ve ever been served in a restaurant. It’s a place that’s worth a trip to Belgium just to sample.

Shrimp roll – Shrimpwreck
Seafood sandwiches of one type or another played a major role in my 2016 eating habits with none finer than the Shrimpwreck shrimp roll. Now an established favourite of the Edinburgh street food scene, it will be interesting to see how things develop for them in 2017.

Buffalo wings – Nightcap
The wings by Feed at Nightcap comfortably trump any other chicken wings in the city. They’ve taken a lot of care to match portion sizes to their smart cocktail selection, with the bigger portions on sale at sister bar the St Vincent trimmed down to suit this more refined drinks list. Their blue cheese sauce is constantly being improved and has now moved from excellent to beyond superb.

Puff-puffs – Forage & Chatter
These simple deep-fried doughballs came with foraged herb pesto at the excellent Forage & Chatter. They were right up there as one of the most delicious treats of the year and we made the obliging staff bring us more of the tasty little blighters.

Escalivada with anchovies – Scorchio Bites
Scorchio Bites is a bit of a nutty idea – bright Spanish sandwich bites served from a Rose Street police box in the freezing cold – but boy is their food good. From a selection of twenty samdwich fillings, the best I’ve had so far is the escalavada – an aubergine, onion and tomato paste – with anchovies, but I can imagine there are others lurking on their list that are every bit as good.

Avocado toast with bacon – Hula
Hula has had a really good 2016, managing a refurb and comprehensive menu overhaul with all the expected class and confidence you’d expect from one of Edinburgh’s best cafes. Soaring atop the mountain that is peak avocado is their avocado toast with bacon topped with a delicious seed mix. It was a dish of considerable style and elegance.

Squid and chorizo – Wood Shed
The culinary highlight of this year’s Festival pop-ups, the Wood Shed by Gardener’s Cottage served me memorably good squid and chorizo. Cooked on a charcoal grill, this was a little touch of street food class amongst a middling range of options that were on offer this year.

Sea trout – Bon Vivant
The Bon Vivant continues to be our finest bar restaurant with their lunchtime menu one of the best value selections in the city. The sea trout main course I had on one visit was not without the odd flaw, but the cooking on the excellent piece of fish was completely spot on.

Parmesan biscuits – Strumpets
I spent a lot of 2016 cluttering up various corners of the fantastic William Street cafe that is Strumpets Coffee. Their attention to detail has been the place’s defining element with the parmesan biscuits that accompany their delicious quiche the absolute height of their baking powers.

Mac n cheese – Lucky Pig
Lucky Pig took over the kitchen at Paradise Palms, where Ninja Kitchen had previously held court, and hit the ground running with a power-packed menu of veggie and vegan delights. Their chipotle mac n cheese was the highlight over the course of quite a few visits. It packed a tonne of flavour into a deliciously oozy pot of deliciousness.