Well, 2016 has been a year that many of us would like to forget, but instead of forgetting just yet, we have our usual festive stocking filler posts which review the year, month by month. 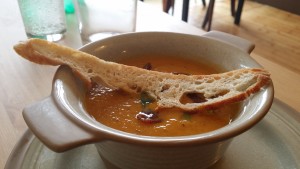 Soup at The Walnut

The year began in fine style with a trip to Feed for their excellent burgers. The team behind this enterprise featured a lot in further posts throughout the year.

Obadiah was a coffee shop that burned brightly but briefly. Their bean roasting legacy endures, though, with cafes across the city continuing to use their excellent product.

I enjoyed the Chop House, the Royal Exchange Cafe, Miro’s Burrito Box, and it was good to finally make the acquaintance of the Gibson Street Artisan Roast in Glasgow.

Harry’s Bar and Grill had a brief stint before reinventing itself later in the year. Noir and Lowdown brought outstanding coffee class. Seasons was hugely promising.

The Walnut was the highlight of the month and one of the main highlights of 2016. It’s an absolutely fantastic place. I’ve sent people there all year and I’ve barely had a single instance of anyone thinking it was anything other than first-rate.

Not so first rate was Chopstix. I loathed Burgers & Beers. Tutto Matto improved from dreadful to ordinary across three visits. And I still couldn’t get the hang of the North Bridge Brasserie and suspect I never will.

Guides to Dining Around the World