Sometimes it’s unfair to review a new opening in its first few days of trading; other times it’s sensible to get in early while you can still get a seat. Wildmanwood, the new pizza place from the Malcolm Innes stable, which includes the joyful nearby Ting Thai Caravan falls firmly in the latter camp.

I visited on their third or fourth day of trading (yes, we’re running at that long a backlog – they’ve been open nearly a month, now) and was joined by regular guest quester Dan.

What’s more we ran into another regular co-conspirator, Freya, who had been lured in a little ahead of us when passing. She was already sporting a pretty wide grin, which boded well.

The place has taken a good while to open, with a complicated refit – not least to install an impressive pizza oven – of the premises that was previously the Olive Tree Cafe Bistro. They’ve made a fine job of it, giving the place a welcoming feel with long bench seating for communal dining mixed with a couple of tables and window shelf seats.

After renewing acquaintances with a couple of familiar faces working in this exciting new venture, we settled down to ordering. Freya was already half way through her go-to option of a diavola, with spianata calabrese and Guindilla peppers. Dan chose the seafood option, while I plumped for the sobrasada and mushroom with goat’s cheese. 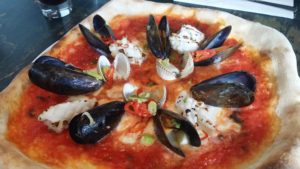 Pizzas took a moment or two to arrive but looked mighty impressive when they did. Dan’s was very neat indeed with really smartly presented mussels, squid, and cockles. Mine looked monstrously rustic with oodles of softly spread sobrasada. We tucked in with considerable relish.

The base packed in good crispness and lightness, with the crust just nicely firm and chewy, like a fresh baguette. Freya had the right idea having ordered some of their wild garlic dip to assist the crust munching. Toppings, particularly the sobrasada, were of really pleasing quality making each mouthful really satisfying.

We now have quite an array of high quality pizza places in the city: Dough is great for takeout; Civerino’s has a great friendly swagger to go with its tasty pies; Origano is still just a notch ahead of the pack; and now Wildmanwood offers excellent pizzas of quality rustic charm. It’s right up there, in terms of end to end dining experience, with Paesano in Glasgow.

So overall, Wildmanwood is a sure-fire hit and a great addition to our dining options. It’s beautifully located for feeding our Fringe revellers this August and will likely have built a tall reputation by then. It’s priced very competitively so is worthy of frequent repeat visits. I look forward to seeing you there.

I’m always struck with a mixture of excitement and trepidation when Lunchquest gets in touch to arrange a trip to new place, having survived the likes of the now defunct World Buffet with him on previous trips. However this time around I’m glad to say the trip to WildManWood Pizza was an absolute pleasure. 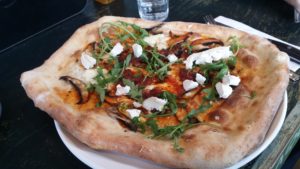 We went for lunch on its first week of trading and I had to do a couple of google searches to track it down having struggled to master the exact name (Wild Wood Man?) which I still think is a rather odd combination. The restaurant mainly has a long table, relaxed communal style dining layout and we were early enough to get a good spot to sit along with Lunchquest’s friend Freya who is a fellow fan of my favourite bar in Edinburgh, Smith & Gertrude.

The menu was pretty simple with only pizzas and salads to choose from, all of which were very reasonably priced. I went for the seafood pizza option which was soon popped in the gigantic wood burning oven which dominates the open kitchen. It came out a few minutes later and looked fantastic, with lovely fresh ingredients. The toppings were great but the highlight really was the dough – a base that was just the right combination of taste and chewiness without being too thick.

In terms of pizza in Edinburgh this really is right up there in the top tier perhaps slightly ahead of Civerinos and knocking on the door of my favourite (and unlikely to taste better) Origano on Leith Walk. I would definitely recommend giving it a go.

One thing to note is that Wild Man Wood didn’t take cards on this visit, although perhaps that was just a first week thing. I was not armed with cash that day and Lunchquest kindly picked up my cost so next time the bill will be on me (hopefully somewhere equally as good as Wood Wild Man).