The Brauhaus used to be one of the most pleasingly odd beer venues in the city. 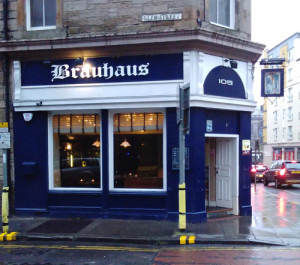 Tucked away off the busy heart of Tollcross on the corner of Lauriston Place and Glen Street, it boasted a couple of twin attractions: a strong commitment to football – Hearts and, strangely, the German Bundesliga – and an equally strong passion for great beer. Thanks to links to the quirky but brilliant nearby Nina’s mini market, it boasted an eclectic – and occasionally thrilling – range of beer.

Sadly, the pub – but, gladly, not Nina’s – changed hands. I ventured in a couple of times but it never seemed to have the energy – or edge – of the old Brauhaus.

But it’s now embarked on its latest incarnation, so I was pleased when I was in the vicinity and could make a flying visit.

It’s subdued and intimate – a bit of a squeeze at the tables, actually – in the cosy, spruced-up interior. A chalkboard on the wall advertises a wide selection of decent bottled beers, with some of the Belgian classics supported by the best of British, including Buxton, Cloudwater and Siren.

And a similar chalkboard by the bar lists the draught beers, with an initially interesting-looking selection from Belgium, Germany and Scotland.

So far so good. And yet – unlike the recently-reviewed Six North, with its deep-rooted passion for Belgian brewing – this feels more surface than substance.

On draught, Germany is represented by Paulaner and (sort of) by West. From Belgium, we have Leffe and Belle Vue. From Scotland, it’s Barney’s – a brewery that has never excited me – Volcano IPA and Trainwreck from Fallen, for my money now one of the best breweries in Scotland after an astonishing improvement over the past few months.

It’s no contest: a half pint of the powerful 8.5 ABV Trainwreck (£3.85). It’s terrific and everything you want from a double IPA – appetising fruit aroma and light and drinkable with a whisper of alcohol heat in perfect harmony with the hops.

There’s nothing else on tap that lures me back to the bar, so I dash to my other appointment – and later repair to the Hanging Bat, where a clutch of brilliant beers tempt me. 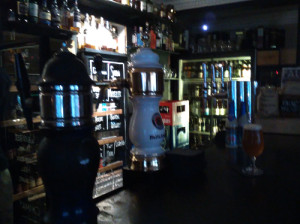 And that’s the main problem with Brauhaus. Tollcross boasts two of the best pubs for beer in Edinburgh – if not Scotland – in the Bat and Cloisters, as well as a few good ones. If you’re billing yourself as somewhere that’s serious about beer, then you’ve got some stiff local competition.

Brauhaus is fine – worth a visit if you’re in the area, but I think it’s needs something extra if it’s going to make a splash in this most beery corner of town.