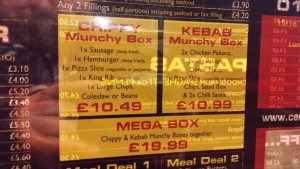 Munchy boxes. A Glasgow or west coast invention, I think. A pizza box filled with…all manner of things. They span the chipshop, the Indian, the Chinese takeaway and possibly beyond. They are often judged by quantity rather than quality.

The challenge I’d set myself was simple: find the best box in the city.

So here’s what we’ve found so far across the first five places we’ve visited.

It seemed like a good plan to start this featurette at a venerable institution, the Central chippy on Teviot Place.

It has been in the same ownership for as long as I can remember and I’ve been cluttering up this part of town for a while. I have a nagging suspicion I’ve been thrown out of the place at least once. I can’t remember exactly why, so I imagine strong spirits had been taken.

The Central offers two munchy box options: a chippy box or a kebab box. I opted for the former, which comprised battered king rib, burger and sausage, chips, beans (or coleslaw) and a slice of pizza.

Having acquired the weighty item, I toddled homewards then tucked in. Layer one was the pizza slice which was of the decent pepperoni variety. I had a go at the sausage which was much as expected. Then I tucked into the beans which were beans.

Layer two held the king rib which I didn’t really understand or like. With a few chips sampled (good), I then gave up and left things for breakfast consumption. The overnight wait didn’t do much to the remaining burger, which was fine, or the chips which were better hot than cold.

So the start of munchy box quest was in the realms of interesting and instructive rather than being overwhelmingly successful. But I was on the road to find the best in the city, so it was good to have started somewhere familiar.

The next munchy stop was at Southside stalwart Marmaris. I couldn’t find a reference to munchy box on their menu boards, but as soon as I mentioned it, the friendly counter man was about the task of preparing things. 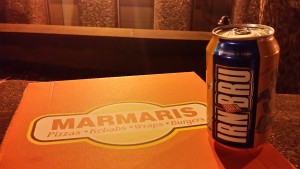 It brought together the layered approach, once more, but in a new format where the lower layer was a pizza.

This box looked monstrously good. This was the first appearance of pakora, a munchy box staple, with both chicken and veggie varieties. To this was added chicken and lamb donner meat, chips, salad, garlic sauce and a can of fizzpop. I opted for Irn Bru, as it seemed appropriate.

The pakora were very good bordering on the excellent with the chicken ones particularly crisp then succulent. They were the undoubted highlight, but everything else was really pretty good, too. 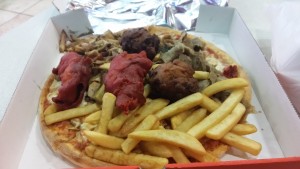 It was good to see two types of donner meat, profuse salad and good garlic sauce. The pizza was good and cheesy. The chips were a touch weak, but the place doesn’t have a chipshop fryer so they were probably about as good as could be expected.

So overall, Marmaris raised things up a couple of notches on the munchy box scale. This box brought together a number of very good items. It felt like a very good early contender for the munchy box crown.

The Bodrum Express on Rodney Street continued the Turkish theme and their munchy box was pretty similar to that offered at Marmaris. 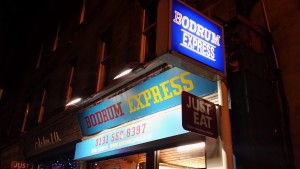 They only had one chicken pakora left, so I got three veg pakora to make things up. They only offered lamb donner meat. And I had cola instead of Irn Bru. Otherwise it was directly the same meal.

In aspects better than Marmaris, I like cola more than I like Irn Bru, and Bodrum has a chippy counter so the chips were a good bit better. The pizza was of pretty much the same standard.

Marmaris definitely wins on the donner meat both for variety and overall quality, though.

Again, I was surprised by how good the chicken pakora was. It wasn’t quite as good as Marmaris, but it was still a standout item. The filling of the Bodrum veg pakora was a little powdery and not quite so crisp, though.

But overall, this was still a solidly good effort from Bodrum Express. It was my first visit to the place as I’m rarely in this part of town in the evening, but I rather liked it and would happily visit again. This felt to me like a really good example of a 3 star box, so I was glad to have found it.

I’d heard a mixed set of reviews for Javit’s, on West Granton Road, over the years. I’d noted it won the accolade of best takeaway kebab in Scotland in 2015, which is really quite something. On the Friday evening of a long working week, I ordered one of their munchy boxes and headed home to try it. 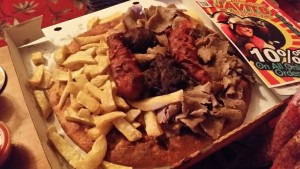 Their prompt delivery man arrived just before me, so I crossed my threshold with the characteristically weighty item in hand.

This box offered my first experience of a garlic bread pizza as the centrepiece. Based on this one, I’ll steer clear in the future as it was cremated to a crisp in the middle and tough as leather on the outer edges.

Strengths were the good chips, fresh salad, and decent sauces.

The much vaunted kebab meat was pretty routine and the pakoras were ordinary.

So Javit’s was a bit of a disappointment. It turns out they have another branch on Westside Plaza, which is where this box actually came from, so to try the West Granton shop I may need to make a personal appearance, which I should do in the near future. 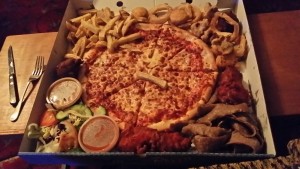 After a long day south of the border, down Mexico way, my train pulled into the harbour just in time for me to meet the delivery man from the Balgreen Fryer, a chippy on Balgreen Road that I’d tracked down on Just Eat, at my front door.

He conveyed to me a staggeringly large pizza box which packed a hefty weight. Upon opening it, my eyes were met with a raging panoply of delights, with eye-catchingly neaty sliced kebab meat, a good looking pizza and plentiful chips. I hoped it tasted as good as it looked.

Although I think the Marmaris box has it beaten for overall quality, the sheer volume and diversity made me quickly consider this the best representative of what a munchy box should be that I’d yet come across.

Strengths were the crisp onion rings, decently light and herby pizza, and very good chips. The pakora were very crisp but the chicken ones weren’t all they could have been. The donner meat was as juicy and flavourful as I’d come across of late.

So from this initial small sample of the gargantuan delights of munchy boxes, I discovered two very good examples in the shape of Marmaris and the Balgreen Fryer. Munchy boxes have been shown to come in many different shapes and sizes, are a considerable undertaking and defy single sitting completion, and are a gloriously silly aspect of our chipshop culture. I’ll revisit them from time to time, I imagine, and hope to find further good examples.