While I’d seen positive reports about the Stockbridge Restaurant, I’d been circumspect about visiting as their PR people had plugged the place to death and I was totally bored of reading about it.

However, when one of my annual Christmas lunches was booked there, I was pretty pleased to try it in this context, to see how it handled a large party, with mixed dietary needs and a range of ages. 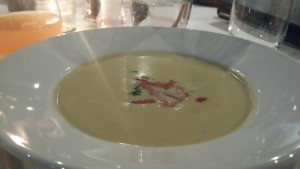 We were a party of 15, comprising 12 adults and three stylish under 2s.

A twinkly Stockbridge basement, just next door to the Last Word Saloon, we had the run of the place to ourselves, which was probably no bad thing as it allowed the adults to behave as boisterously as they liked.

Lunch was £26.95 for three courses which seemed about par for the course. They offered a special vegetarian menu, too, which was a nice touch.

Once we were seated around two smart tables, we quickly romped through the ordering process. I started with the Jerusalem artichoke soup then followed with a venison casserole. We ordered desserts, also, with cheese from Mellis proving a popular choice. 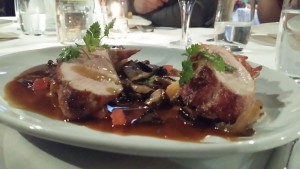 Starters were promptly delivered looking very neat and tidy. My soup was smartly topped with bacon. It proved to be an outstandingly good opener and one of the best soups I’ve had in a good long while. It rightly joins the soupy Gods in Soupquest’s exceptionals.

There were similar noises of approbation round the table, with mention that the haddock risotto was similarly impressive. 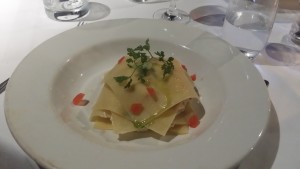 The pheasant was a popular choice for main and was warmly received, as was the crisp-skinned salmon.

Sadly my venison casserole was pretty tame stuff. It showcased a fine local ingredient, and the dish was finished with smart parsnip crisps and smooth potato, but it lacked sparkle and wasn’t to the standard of the other dishes. 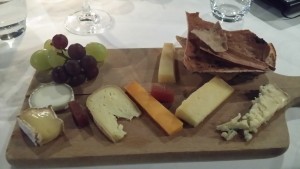 The cheese returned things to a much surer footing, with a lovely selection. It included Dunsyre blue, Anster, Lochnagar and Durris, alongside excellent crackers and crisp toasts.

We rounded things out with decent espresso and good petit fours.

So overall, there was a lot to like at The Stockbridge Restaurant. I managed to locate the weakest dish on the menu, which was a shame, but the soup and cheese were both excellent making the experience a very positive one. I’d be happy to visit again.

Scores
Blythe scores the Stockbridge Restaurant
4/5 for food
3.5/5 for presentation
4/5 for setting
4/5 for service
giving an overall 15.5/20

We wore: attendees under 2 were conspicuously better dressed than most the adults