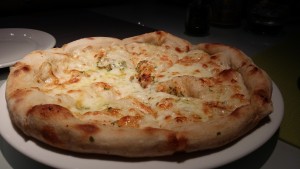 I was pleased when Keith, who’d previously quested to TriBeCa, reported a new restaurant opening that he’d come across in Tollcross. I’d visited Rigatoni’s southside pizza place and been pretty underwhelmed, but the menu for their new restaurant looked much more enticing. It was fun to find that Keith knew our watch man Jonathan, from days of yore, also, so we spent an enjoyable catching up.

Keith has covered the experience very nicely, below, so I’ll defer to his view.

What I will add is that the lunchtime and pre-theatre selections look to be much more worthy of investigation, as this felt a fairly substantial wedge of cash for pretty routine stuff. My melanzane starter was one of the worst presented dishes I’ve been served in a while, also. But otherwise, over to Keith… 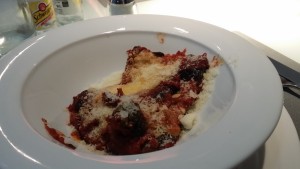 Awful presentation of the melanzane

I had long been a fan of Leven’s, the Thai fusion restaurant in Tollcross and never understood why it was not busier (B – it was not busier because the menu was full of really odd dishes, but I wasn’t as much of a fan of the place as Keith…;-)). I was basically in mourning when it closed and closely kept an eye on the space to see what would become of the very nice restaurant space.

After a space of time Rigatoni’s appeared quietly with little fanfare. I popped in a few days after opening to try their reasonable lunch deal on a Sunday and was very pleased, although bruschetta and penne piccante should be well within the scope of most chefs.

I had suggested to Blythe that we try it and it was good to see Jonathan from the Edinburgh Watch Company, who I had not seen for 20 years or so. It was a pleasure to hear about his business and I was lucky to leave without a new watch…maybe next time.

The service was friendly throughout and very welcoming. The chef came to see how we enjoyed everything. The cheese focaccia was a treat to begin and I opted for the bruschetta (again – so boring) and the carbonara. There was the option of pasta style so I opted for the penne and a further choice was offered to have it “with cream” or “Roman style”. I selected the latter as I much prefer the drier carbonara you tend to see more in Italy than the creamy versions so often offered here.

It was a good portion and satisfying, although slightly salty for my liking. The bruschetta was fresh, tasty and as good a bruschetta as I have had.

I was full so skipped dessert and coffee. Blythe and Jonathan both looked to have good dishes although the presence of fish in Jonathan’s main prevented me trying to. Blythe’s main was tasty from the small taste I had.

There are a few Italian restaurants nearby such as Nonna’s Kitchen but it is good to have another place in the area that is easy to get to and has a friendly welcome. I shall certainly place it on my shortlist for lunch visits when in the area.

We drank: gin and tonics; glass of house red

Pesto – a Quest in the West – SADLY NOW CLOSED