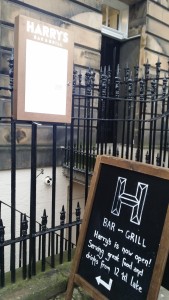 This wasn’t my first visit to Harry’s Bar & Grill since its revamp a few months ago. I’d been along on one of the opening nights with Sharon from Bite Magazine. We’d been very impressed. I popped in for a lunchtime visit in hopes that a similarly top-notch feed would be in the offing.

At lunchtime, they offer flexible menu options with reasonably priced one and two course set menus and their full a la carte. I settled upon the two courses for £12 including a soft drink or coffee.

But first I had a little look at their cocktail list which brought together classics and more bespoke concoctions. I opted for one of the former with a bright and refreshing Paloma, which whet my appetite in good style.

I chose to start with a pair of black pudding bonbonbonbons accompanied by apple puree. These were smartly presented and the bonbonbonbons were beautifully crisp. The filling was richly meaty, too, but the puree was rather too sparse. It was essentially just there to hold the bonbonbonbons in place and offered very little beyond that.

My main course of steak ciabatta and chunky chips was a much more complete success. The steak, from local butcher J Gilmour, was impressively juicy and flavour-packed and the roll pleasingly good. The chips were sensational; as good as I’ve had in the city. The accompanying chorizo ketchup was mighty fine, too.

I rounded things out with surprisingly decent espresso, particularly given they’re using Italian Aroma coffee, which is not a favourite of mine. 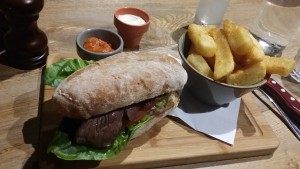 So overall, Harry’s is doing extremely good work. The little hiccup with the puree in the starter aside, this was one of the best meals I’ve had in a bar setting in a long while. With a Josper grill to cook their steaks on, Harry’s offers a really strong food and drink selection, so merits a visit at your earliest convenient opportunity.