While I’ve clearly missed out on the gene for “adoration of Mexican food”, it’s hard to argue that Edinburgh is not spectacularly well-served for this type of cuisine. One of the better places we had was Tex Mex, but this sadly closed earlier in the year.

El Cartel arrived in its stead in late in 2014, to save the day, but was struck down by a serious kitchen fire after only eight weeks of trading. Along with friend and colleague Adrianos, I was lucky to be one of those who sampled its original version.

Now, I’m not a particularly superstitious person, but when this happened I was a little freaked out. I’m sure owner Stu McCluskey (who also owns the nearby Bon Vivant, amongst other places) was that and more, but my alarm was related to the words I had scheduled to post as part the my review of my first visit, the very next day following the fire.

I had described their hot sauces as ranging from “pleasantly tingly to “call the fire brigade””. Had my words really taken on paranormal powers and made it happen? If so, I can only apologise to all concerned.

Thankfully, the charming little place has been restored to full working order, so I gave it a visit to see what the new incarnation looked liked. 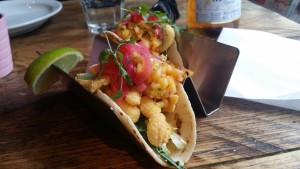 Along much the same lines as before, tacos are the main courses, but the real fun lies with the starters. I was sad to see my two favourites from the previous trip swapped out, so no massive bits of pork crackling or plantain and chorizo fritters, but the excellent guacamole was still there, so I started with that. They’ve now added a daily changing special taco, which today was fried squid. It sounded good to me.

The guacamole was soon with me and was as accomplished as before. Matching the Mexican national flag, with its avocado, queso and pomegranate seeds, it was very tasty. Freshly made plantain crisps worked in lieu of a spoon just wonderfully. It was a firm thumbs up.

As with before, I wasn’t quite so taken with the tacos, but these ones did pack good initial zing and the squid was nicely cooked. I just tend to find taco shells to be quite bland, under-seasoned and flavour-sapping.

So overall, El Cartel has returned on similar fine form to its initial run. It’s a little pricey for a solo diner, but when you get a group of four or more on the case, the shared costs become much more reasonable. I’d be happy to recommend a visit and look forward to trying their tequila, next time. I sincerely wish my words have no further negative impact on this lovely little restaurant and all who sail in her (and if those words lead to the place flooding, I’m giving up and going home).