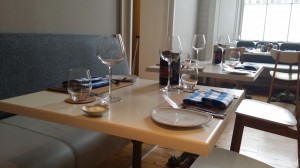 It was post-Referendum Friday and like most of the nation I was rather weary. I’d actually slept through most of the results, but a skinful of ale had been drunk during the evening. I felt pretty rough, so much so that when the lovely waitress in recently opened Fish Eatery, on Picardy Place, asked me how I was, my initial attempt with “fine, thanks” was soon replaced with “actually, I feel terrible.”

My entirely more bright-eyed and bushy tailed dining companion today was regular guest quester Kim, who most recently joined at nearby L’Escargot Bleu.

This was the fourth different restaurant incarnation that I’ve dined in, on this site. I was an intermittent diner when it was the Hallion’s restaurant, visited once when Martin Wishart had a brief tenure when it was Home House, and was a frequent flyer when it was the original home of Restaurant Mark Greenaway.

This version is in the same ownership as Steak, which is just next door, and recently opened fine dining Italian Enzo. Although I’ve not published a review about either of these places, I’ve visited both and found them rather hit and miss, so I wasn’t quite sure what to expect from Fish.

The restaurant space is much the same as ever, with the large portrait of Henry Raeburn dominating the room. It has a much more light and airy feel than before, though. It’s a very nice space and they’re using it well.

We had two different menus to choose from, with a short focussed lunch and day menu, as well as the full a la carte. I was hooked in by talk of a fish tea and asked whether a starter of chowder would be over-doing it or not. I was confidently assured that that would be more than fine. Kim opened with a coronation shrimp salad then chose monkfish scampi for main.

Starters arrived promptly looking neat and tidy. The soup was very good with profuse seafood and corn. It had a well-judged texture and was a satisfying eat. The shrimp salad was also warmly received.

The main courses looked a little less elegant, but fully embraced the chip-shop stylings. Portion sizes were very generous. My thirst was glad of the pot of tea to go with my fish and chips. The fish was fresh, the batter light and the chips, which were more in the frites style, were good, too. Kim enjoyed her monkfish, although I tried a piece of it and wasn’t entirely convinced.

I still had tea to round things out, while Kim tried their espresso, bringing down the curtain on an enjoyable lunch.

So overall, I think Fish was my most enjoyable dining experience across this little stable of Edinburgh eateries in the same ownership. Their food was very good and hit the spot rather nicely. I thought it worked very well as a lunch spot, so would like to think it will do good daytime business. High quality specialist seafood places are still a curious rarity in Edinburgh, so Fish fills a gap in the market with assurance and a nice bit of character.