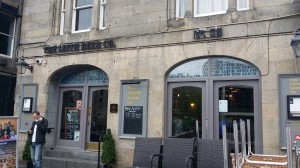 
It was with considerable expectation that I headed for Leith on a fine Friday lunchtime. The original intention was to head for the Lioness Of Leith on Duke Street, but upon finding that closed for a function, we headed towards The Shore, alighting upon the Leith Beer Co. 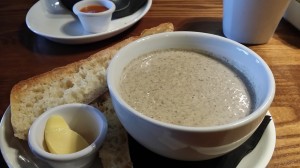 I was joined today by David, whom I’ve known for years but who’d only just worked out that “Blythe from the office” and “Blythe from Lunchquest” were in fact the same person. We’ll get David’s questude verdict, in a moment.

This pub has gone through a few incarnations and revamps over the years. It was the first time for me in its current iteration. It’s quite a smart and airy layout in a fairly traditonal style. 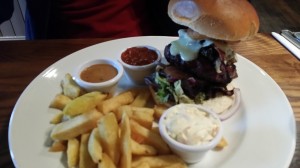 The friendly waitress soon brought us menus to consider and read us the specials. I was pleased with the sound of the mushroom soup, so ordered some of that. David opened with a little bucket of chicken wings. The waitress helpfully pointed him in the direction of the peri peri sauce, which she suggested would meet the “hot but not too hot” need. He followed with a haggis and beef burger, while I opted for the steak pie.

Starters promptly arrived and hit the spot very nicely. I pinched a wing and found it crisply coated and tasty. My soup was lovely and creamy with a good rustic texture. Thumbs up. 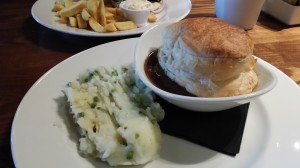 The main courses weren’t as good. The pie filling contained generous chunks of tender meat and was pretty good, but the accompanying mash with crushed peas was under-seasoned and had an odd texture. David’s burger looked decent, but not much more than that.

So overall, we had a crackin’ good time, but the food was a bit uneven. Finding a good pub pie is becoming much more of a challenge than it ever was. Today’s was decent enough, although David did point out that it wasn’t a “real pie” but just stew with a lid, but it gave me spur to go in search of finer examples, so there’s a pie quest in the offing. I’d happily pop back to the Leith Beer Co for a pint, but with such good choice in the neighbourhood I’m not sure eating here again would be a particular priority. 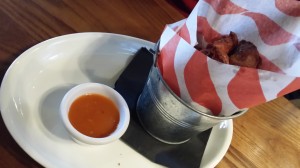 Chicken wings open proceedings – deeply, deliciously crisp and served with a spicy dipping sauce. Strong start. The beef burger was substantial, piled high with haggis, cheese, bacon and onion rings. Unspectacular, but the ramekin of pepper sauce really brought it to life – an inspired touch. The chips were fine. Reasonably good food, served with a smile by the attentive waitress.

Fishers in the City