Blythe’s Verdict
Rarely have I enjoyed a lunch more than the one we had today at Artcafe Morita. It makes me smile just thinking about it, and the flavours of dishes linger long in the memory. But I’ve given you the punchline, without telling you the rest of the amusing story, so let me rewind things, a little.

MJ had spotted Artcafe Morita on her travels, and was intrigued enough by it to suggest we take the opportunity to visit at our earliest convenience, which proved to be today. In a highly unusual development, MJ indicated that she might be “a bit late”. She arrived at 12:31pm, making her precisely one minute late. The girl is a marvel, an opinion which was reinforced by her donning her marvellous glasses.

Through her glasses, MJ was able to take in the artsy little café, which has walls bedecked in contemporary art. We both contemplated the short focussed menu, which straddles cuisines. They’ll quite happily rustle you up a bowl of porridge, a bacon sarnie, or a curry, but it was to the Japanese elements of the menu that we turned our attention.

I was in hungry mode, and keen to erase the memory of last night’s soup disaster, so opted for soba noodle soup, with intriguing sounding haggis sushi to follow. MJ opted for yakitori then a sushi set, featuring spicy leeks and smoked salmon. We decided to share a portion of chicken dumplings, as well. All dishes were very reasonably priced, so while this felt like quite a lot, the bill came to a little over £12, so a complete snip. 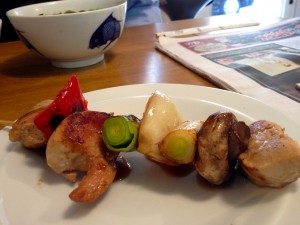 Now, things didn’t go completely smoothly with our visit. To begin with, the sushi master was out at the shop re-stocking with vital supplies, so when he arrived, things were running a bit behind. It meant that we were sitting for almost an hour before dishes started to appear. Dishes were prepared from scratch with considerable care, and the staff were very apologetic, but it was a long time to wait. Fortunately, MJ and I had plenty to catch up on, so the time flew by. 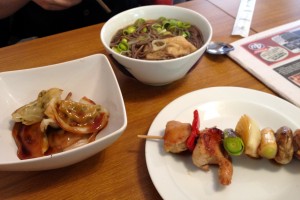 The yakitori, dumplings and soup came together. All looked very pretty and smelled great, so we tucked straight in. My soba noodles were packed with flavour and served in a delicious broth. I was delighted with the dish – it was first class. The dumplings were good, too. I think I’d made the better choice, as MJ’s yakitori didn’t look quite so good, but I’ve been on a bad run of food envy, so was secretly glad to see the tables turned, today.

All of our sushi was served together on one plate, and looked neat and stylish. The pieces were chunky, rather than dainty, but I was pleased to see that. The haggis was extremely filling, packing lots of flavour in each satisfyingly tasty morsel. The leek had lots of tail-end heat, and the smoked salmon was brimming with smoky flavour. Each of the varieties provided you with a lengthy sensory experience, taking you though a range of tastes, flavours and textures, meaning that I lingered over each mouthful as new sensations arrived. This is a really neat trick, and spoke of real skill in the preparation. 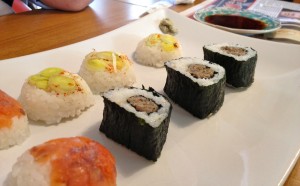 I must admit that I’ve come to this questing game without a great love for sushi and sushi places, and Artcafe Morita finally allowed me to put my finger on the problem. For me, sushi is a dish to be admired and revered, but it’s something of a cold technical exercise. It’s said that with people, you tend to like and admire them for their qualities, but love them for their quirks and faults. I don’t think you necessarily love food or restaurants for the faults, but I think places that excite an emotional response in me are places that offer fresh, new twists, rather than trying to embody some sort of mirthless pursuit of perfection. 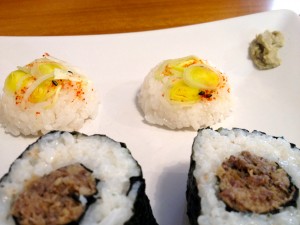 Interestingly, I think part of the role of reviewer is to offer quite a dispassionate assessment, as suggesting that others are going to have the same emotional response that I do to certain dishes is patently absurd. A good example is that I LOVED the crazy, over-ambitious soup in Time 4 Thai, the other day, but I recognised that it had manifest faults, so couldn’t award it anything higher than 4/5. Technical accuracy is easier to translate in to a mark that’s understandable to others. I think this in no small measure accounts for the bajillion Michelin stars that Japan now boasts.

This is a long way to get to the point, which is that Artcafe Morita put the mirth in sushi, for me, and it didn’t need conveyor belts to do it. I’m not sure what sushi purists would make of the place. The experience is much more informal, playful and fun than other places we’ve tried, and doesn’t exude the elegance of a place like Kanpai. It’s very difficult to compare, as the experience in Artcafe Morita is unique. It has the real feel that you’re stepping in to someone’s house, who just happens to be knocking together sushi rolls to pass the time.

It made me smile, a lot, which is a good thing for a restaurant to do. The food made me happy, also. And I think in quite an important way it made me understand some of the reasons why certain experiences in sushi places haven’t been quite to my liking, in the past.

I’d definitely recommend that you go along and try it, although make sure time is on your side. I’ll definitely be along again, soon, perhaps to try one of their excellent lunchtime takeaway deals. 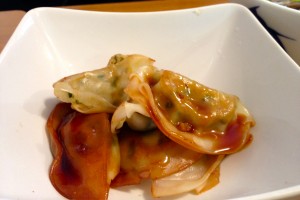 Last week when I tripped down the Royal Mile after a wonderful day of discussing War of the Worlds with my students, I was ready to experience an interesting version of Japanese food at the wee café I had spotted on one of my previous jaunts up the street. Little did I know that ‘tripping’ would be such an apt term to describe the fun lunch that would follow. The café itself is unassuming and when I arrived, B was already seated at one of the few tables wearing an amused expression, and the owner was running around and eventually left the shop and crossed the street. After I put on above mentioned glasses, I was able to fully appreciate my surroundings.

B explained that the chef had not arrived yet, and that was what the kerfuffle was about. The café itself is tiny. Really tiny. There are a few seats separated from the kitchen bit by a couple of glass counters holding a few bits and bobs of ingredients and pre-made sushi. The only cooking premises are right there and consist of a microwave, a small stove (looked like one I’d have for camping), and a slow cooker.

After a while, we decided to order and I placed the order at the counter. Later, the owner came to the table to re-confirm what I had ordered. Sadly, there was no veggie haggis sushi that day, and the regular haggis sushi was going to take a while to make, but this is something we were willing to do in order to try it.

Soon, the wee place filled with the smoky smells of a wok as various takeaway orders were filled and someone even opened the door at some point to help clear the air.  It took a while for the starters to arrive (for which the owner apologized and explained that everything was made fresh, which is excellent news and B and I didn’t mind in the least), but when they did fly over, they were quite nice. The soba soup was impressive, filled to the brim with deeply coloured soba noodles and a rich broth that would have been a plenty large enough lunch on its own. And, it makes a nice accessory when added to a suit jacket and tie. The dumplings were delicate, obviously hand made and covered with a sweet sauce that complimented the filling—which I am still not sure what it was. The chicken skewer I ordered was good. Simple, well cooked, did ‘what it said on the tin’. 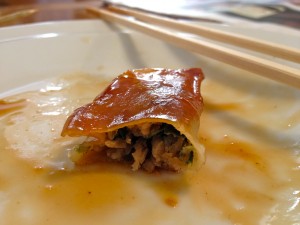 We dispatched the starters soon enough and then waited for the sushi to arrive. It came out on a long plate with a platter of soy sauce on the side. The salmon sushi was good, the highlight being the intense smoked flavour of the fish. The leek and Japanese spiced sushi was a bit dry, and the spice kicked you in the throat at the end. The haggis sushi was the star of the show. It was simply haggis, rolled in rice and seaweed: a combination that was simple and interesting. It tasted just like it should have…rice, haggis, seaweed. But for me the textures of the rice and the haggis were too similar and softly gooey for me to re-order it. However, I think it is an interesting combination and perhaps some form of tempura haggis would work well in the sushi (but I’m not sure where they would put a deep fryer in the tiny place).

After we left, I smelled intensely of Japanese home cooking. There are worse things to smell like, but I’d not wear anything I wasn’t planning to wash immediately, should I pop by for a sit in lunch again.

I think that with this café, the thing to do is to do one of their many takeaway options, and have a chat with the lovely people behind the counter who are hard at work doing what they seem to love. You get a great deal of freshly made food and it is different enough that it should do well where it is located. I just hope they can cope with the influx of customers as we get into the summer months and the festival season looms.

We wore: the greatest pair of spectacles in all of Christendom, www.tieclub.co.uk tie (which ended up covered in spots of noodle soup, inevitably)