I am rather fond of cuisine from the Middle East and Mediterranean and was quite excited about our trip to Nargile on a beautiful Monday afternoon. When I arrived, B was already there and the place was nicely set out with a modern décor that utlised the front windows to flood the restaurant with natural light. It took no time at all before our Groupon order began to arrive. The groupon deal was fabulous, and if one pops up for somewhere interesting, I usually grab it. At Nargile, this presented us with an extended version of their normal meze lunch.
First, the cold meze  arrived. Several wee plates with a taste of food. We had a basket of warm pitta bread, which was served with a variety of foods, which B mentions below. These were light and fresh and the lentil dish was particularly flavourful. Actually, I plan to give the tuna, dill and chickpea dish a go at home for a quick lunch. I should also mention that all of their dishes were nicely presented with little touches that made me smile like the carrot cut into a flower, the bit of spring onion that made me think of Gumby and the curled lemon rind all added just a bit extra to the presentation.
Soon after the hot meze arrived. This is where I face trouble—not eating the fried foods and all. True to form, we were given a plate of fried delicacies, which looked well-cooked and visually appealing and included: Kalamari, Sigara Bogregi (Filo pastry rolls stuffed with seasoned feta cheese and spinach), Sucuk (Char grilled slices of traditional Turkish sausage), Seasoned chicken wings drizzled with garlic yogurt sauce , and a plate of Mantar Dolmasi (Oven baked marinated flat mushrooms stuffed with spinach and cheese).
The mushrooms were really quite good, the taste of the marinade came through just the right amount.
Just when we thought that we had finished the meal, they took our plates away and brought out our Turkish coffee and a plate of beautifully present baklava, three different varieties and a wee bowl of rose and lemon Turkish delight.
Overall, the whole experience was one that I would happily repeat. I really want to return there when I can have a go at their full menu. But I think that will wait till I return from Istanbul and am missing the food and wanting a little taste of the Middle East/Med. 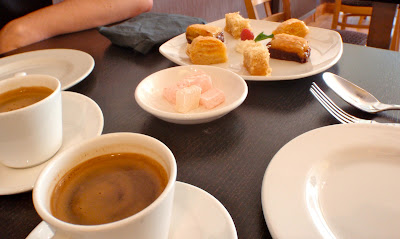 Blythe’s Verdict
With MJ due to make her first trip to Istanbul, later this week, what could be more perfect than a Turkish meal on Hanover Street, to acquaint her tastebuds with some of the flavours they’ll be exposed to in the city where east meets west.

Nargile was flooded with winter sunshine, today, showing off its simple layout to excellent advantage. I had a brilliant Christmas lunch here, where they brought us the entire menu, in a series of small, meze courses. It was tremendous! Since then, it has changed hands, I believe to the original owners, but remains largely the same set-up. 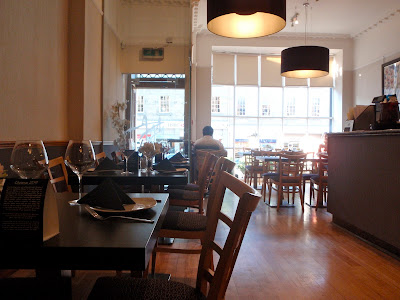 Today we were taking advantage of a Groupon deal for ‘meze and baklava for two’, so once more no ordering was required.

Upon arrival, my coat was taken and drink order quickly taken. I’d arrived a few minutes ahead of the ever prompt MJ, but soon she appeared resplendent in excellent shades.

Once seated, our waitress asked if we had any particular dietary items to avoid or allergies, so our array of meze could be tailored accordingly. We had nothing to declare.

First out for our delectation were cold meze, served with hot pitta.

All were full of flavour, although the tuna could have used a little olive oil to make it more moist. I think the lentils were the standout item for me, as they were packed with earthy cumin goodness.

The hot meze soon followed, as we continued to pick through the small dishes. As MJ eschews the fried goods, I had a plate of calamari, chicken wings with yoghurt, spinach borek, and sucuk, largely to myself.

Again, the dishes were high on flavour, with the calamari really nicely prepared.

We made a pretty good effort at cleaning the majority of our little plates. I think it’s fair to say that it was a very generous amount of food for two, in total. I’m not 100% clear whether it matches to the ‘vezir’ (extended meze platter) on their regular menu – it was described as an extended version of their standard ‘meze’, so I suspect it was tailored to the particular Groupon deal.

A simple, elegant looking plate of baklava followed, with which we chose to drink plain Turkish coffee. Again, MJ isn’t the sweet-tooth, so I flying dessert solo. She did chase her chocolatey piece round the plate, much as I tend to chase noodles round the bowl, but she couldn’t get it to reach an aesthetic angle for further photographing. 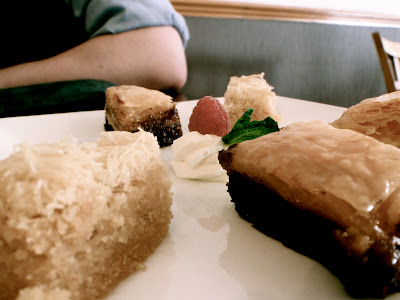 Overall, Nargile served us a lovely range of dishes, and provided MJ with a gentle introduction to the cuisine she’ll be immersed in, next week. I envy her greatly, as I could use a week gazing at the Bosphorus, eating manti and supping Efes. If the longing gets to painful, I’ll happily pop back to Nargile for a little taste of Turkey in the New Town.

We ate: assorted hot and cold meze (detailed above), baklava

We wore: the broad smile of a lady who’s just handed in her PhD thesis (YAY!), the reciprocal smile of a highly impressed gentleman