Crolla is a prominent name in Edinburgh culinary circles, so when I spotted this unassuming little café on Broughton Street, the other day, I was intrigued enough to add it to our list for a little visit. 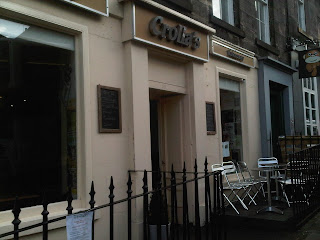 Broughton Street is a hot-bed of restaurants and cafés, with a place to cater for every taste and budget. For some reason, I’ve had it in my head that it’s just a bit too far away from my work to make it my regular brown-bag lunch haunt, but for two reasons, I’ve decided to amend that view. Firstly, it’s completely incorrect; and secondly, I’m now in training for a 100km walk, which takes place in May 2012. This sounds impressive, but is nothing when you consider that Lunch Quest’s inspirational leader, MJ, is planning to run a good chunk of this daunting distance!

I digress. Crolla’s has been open for around a year and half, offering simple sit-in and takeaway fare, from its charming confines. There’s room for around a dozen to sit in; a little more if you factor in the possibility of outside seating during Edinburgh’s generous temperate season. The interior is neatly appointed and very welcoming.

Having gone a couple of days without soup (how I coped, nobody knows), my first priority was checking the available varieties. I was pleased to hear wild mushroom, and minestrone were both on offer. I opted for the mushroom.

The deli counter offered a nice range of sandwich fillings, so I opted to match chorizo with brie, then top it with salad and pesto, all generously heaped inside a poppy-seed roll. Following the completion of the necessary financial exchange, I waltzed my way along the street, heading back to the office, with a considerable spring in my step. 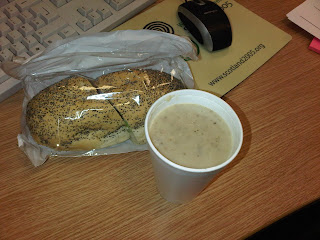 Inspecting the soup, it was revealed as a richly creamy offering. I supped a little from the top, verifying that it was good stuff, then turned my attention to the roll. I have long bemoaned my separation from my beloved Domenico’s, and have pretty much given up hope of regularly eating good sandwiches again, until I get posted back to the Leith district. This roll, although not comprising quite the same symphony of flavours, was definitely the best one I’ve eaten since my last trip to Domenico’s hallowed halls. I devoured it, much in the same way as a former Prime Minister might ickily devour his wife’s love. Sorry for bringing that up, but Uncle Tony really has sullied that word for future generations. 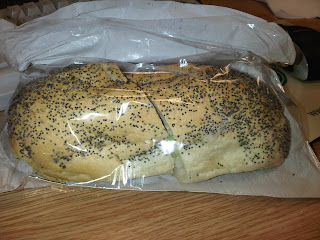 I returned my focus to the soup, which proved highly satisfying. It wasn’t quite at the level of the mushroom soup from Union of Genius, but it was speaking the same lingo and living in the same postcode. I might even venture to suggest that they would be firm friends. 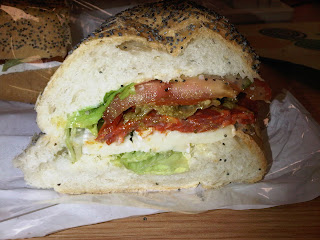 So overall, I was very impressed with Crolla’s. The fact that this lunch cost a total of £3.70, which struck me as exceptionally good value, only served to add a cherry on the top. If, like me, you’ve not noticed this place previously, I’d suggest you seek it out give it a try. From now on, it’ll be on my regular rotation of lunch places.

I drank: the soupy goodness was moisture enough

I wore: a plaster-free ear, for the first time this week