October 21, 2011 City Centre, French, local produce, New Town, seafood No Comments
Blythe’s Verdict
Café St Honoré has been on our hit list for a while, so when we saw it was part of the deal, we booked, immediately. I know that MJ has developed a little intolerance from French style cuisine, but I was optimistic that the Thistle Street region could once more melt her negative preconceptions, as it had done last week.
We were joined by special guests, today, in the shape of MJ’s flatmate, Rachel (who has previously joined us in Divino) and Jemma from Jemma Eat World, one of our favourite Edinburgh food blogs
Under the expert guidance of Chef Neil Forbes, Café St Honoré has developed quite a reputation for stylish and elegant dishes, showcasing excellent locally sourced ingredients. The place has a stylish feel to it, as you walk in, although I must say that I found the atmosphere of the place a little subdued.
I was quickly seated at a table in their main dining area, joining the ever prompt MJ and Rachel. Jemma soon arrived, right on schedule. An excellent basket of warm bread prefaced the arrival of the starters. 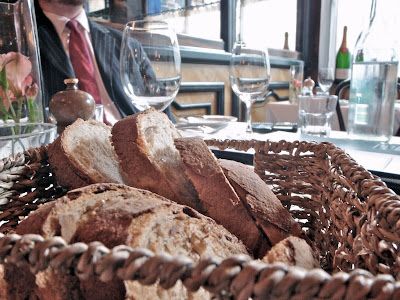 After consulting the menu, I opted to start with the roast pumpkin soup with sage cream, and follow it with the whole grilled plaice with caper beurre noisette.
We gaily chatted about a range of intriguing topics, as our starters arrived. I was very pleased with my soup. It was smooth and packed with flavour. The sage cream was very subtle, but provided a nice herby note to accentuate the dish. In my soup league table (I think this may be an addition to the site, in the near future), it would sit in the same region as the celeriac soup from The Mulroy and the parsnip soup from The Bonham, but still a notch or two behind the cauliflower soup from the .

The main course of plaice was an elegant dish. The fish was perfectly cooked, with rich flakes of white fish nicely accompanied by peppery salad leaves. The caper beurre noisette wasn’t quite as piquant as I was expecting, but that was no bad thing as it worked very nicely with the accompanying potatoes. It was a well-executed dish.

Good coffees followed to round out a nice lunch, and we were left to ponder our verdict. I found this more of a challenge than I usually do. The food was very good, stylishly presented, with quietly accurate service, in an understated but smart setting. But I found the atmosphere stand-offish, somehow. We were having some hilarious chatter, but such jollity didn’t seem to fit with the surroundings. This could be a symptom of a quiet lunchtime service, but we’ve eaten in places with many fewer people and not felt this. It’s not a useful criticism, I concede, but there was something amiss with the “intangibles” of the place.

Overall, though, I can’t argue with the quality of the food on offer, so I’d recommend you make a visit, soon. When you do, I hope you find the place imbued with a slightly livelier spirit than we found on our visit.
MJ’s Verdict
Today we went to Café St. Honoré on the Yelp! Eat locally promotion, where local restaurants give the option of a special 2 course meal (with choices of 2 starters, mains, and desserts). My lovely flat mate and I got a bit overzealous and made it to the Thistle Street Lane a good fifteen minutes early, but Café St. Honoré was ready for us and kindly took our jackets and brought us drinks.

I mentioned this before, but I shall again: I strongly dislike French food. Not all French food, mind, but the fussy overly ornate stuff I really do not like. I’d prefer the rustic versions of anything…any day.
That being said, lunch today with its limited menu (which I checked out online) was kinda my idea of lunch hell. Nonetheless, we soldiered on. I kept a hold of the regular lunch menu, which wonderfully offered combinations and choices for a variety of prices (even if the a la carte dishes were a bit pricey). When B and our guest Jemma Eats arrived, we all ordered. Soon after, they brought out a basket of warm, whole grain rye bread (of a percentage) and slices of a white country bread.
True to form, I digressed from the rest and went for the hake with potatoes and purple sprouting broccoli, and sat patiently while everyone’s starters arrived. When the 2 game terrines arrived, wrapped in bacon and served with a smattering of red onion jam on top, my Flatmate and Jemma waited patiently while I took photos in the awkward light. The consensus was ‘nice’ (and that it probably wouldn’t go past that). B said the soup was grand and fit in nicely next to the one at the Mulroy (I have an eye on his soup-o-metre as a gauge of restaurants).

For the mains, Jemma chose the Braised Scottish Pork Belly, Mashed Potato, and Apple Sauce. She said it too was, ‘nice’, if I remember correctly. Ok, I seem to have this happen a lot. I had food envy. B and my flatmate both went for the grilled whole east coast plaice with caper beurre noisette. The fish was huge! Lovely and de-skinned, served with wee potatoes and such. And then my hake… Ok, it may be a more expensive fish. But my small portion (not that it was too small, but for the price, I felt short changed in comparison) made me look at it sadly. Really REALLY sadly. The fish itself was tasty, but nothing truly special and the potatoes and 3 bits of purple sprouting broccoli were just…disappointing. I think I ordered poorly.
The plaice, was well cooked, but got a bit boring after getting halfway through the large portion.

We followed with Artesan Roast coffees and espressos. They were lovely and uniquely served with a bit of tablet.

Overall, it seems that the expectations were set a bit too high before we even walked in. And though I thought it was ok, I won’t rush back, but to be honest, the only French restaurant I’ve ever willingly returned to (or gone to, mostly) has been Chez Jules—they have killer mussels.