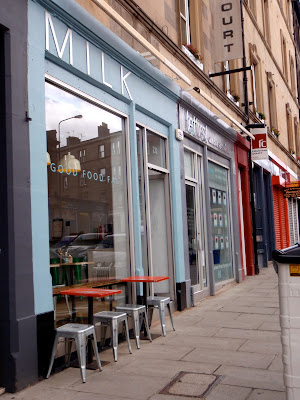 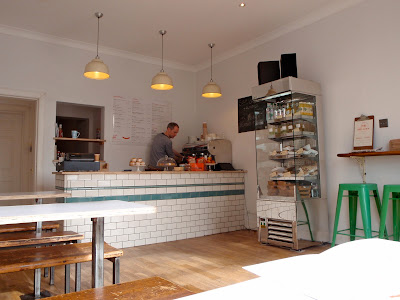 I had high hopes for Café Milk. I had heard good things and I like cafes with light airy interiors and that serve good, homemade food, and there is something quite fabulous about sitting in the sunshine in the cool colours of Milk, but…
It didn’t quite do it for me. Don’t get me wrong, my coffee was good, the service was fabulous and the food menu had promise. And, to be fair, I ordered off-menu (I hate guacamole). But let me reverse quickly. Milk sits on Morrison Street like a beacon of calm. The benches and small tables with the soothing colours and unpretentious golden syrup utensil holders are all great. The charm factor is high.
And then we get down to the nitty gritty. I had a chipotle chicken wrap. To be honest, I expected it to be a sandwich, since it was listed under ‘sandwich’ on the menu and I didn’t see anything to tell me otherwise. I asked for none of the green goo and the guy looked at me like he wasn’t sure why on earth I’d not want it. But, as with any good café, it could be done. The wrap was ok. The chicken, was chicken, the spinach was a nice kick of greenery and the salad was crisp. But the chipotle sauce tasted much like the jarred salsa dip we used to get in the States. Not the most promising, and though there was a touch of heat, it was minimal. That being said, I prescribe to the ‘nothing is actually too hot’ school of peppers, so maybe I’m not a fair judge, and I bet that the typical Scottish palate would be tantalized by the touch of spice. Then, the yogurt would have been welcome. Not that it wasn’t. I like the freshness of it.
But I think my mistake was in the guacamole. I think all the salt and pepper of the dish was mixed in with it, because there wasn’t too much in the wrap itself.
I must also admit that I had slight food envy. And, that I still am curious as to why the soup was yellowish. Turmeric? something?
All that being said, I’d not rush back. It was better than the standard sandwich shop, and good value, and if I lived or worked nearby, I’d return, but if I find myself out Morrison Street again around lunchtime, I’d rather pop into Loudons.

Blythe’s Verdict
After the horrendous weather I ran in to, earlier in the week, it was delightful to be bathed in sunshine as I made the merry promenade from workaday travails, past tram-rail repair experts, to Café Milk, which is located right in my neighbourhood, near Haymarket. I was greeted by a shaded MJ, seated in the window.

Café Milk is small and understated, with a relaxed atmosphere. It feels like you’re being invited in to someone’s private little world, where they will feed and water you, then send you back in to the big bad world. It all seems very quiet, contemplative, and personal, from the sparse design to the syrup-tin cutlery holders.

They’ve just swapped over to their Autumn Menu, which features a good array of options, from sandwiches to salads to hearty warming treats, such as an intriguing Portuguese chorizo stew.

I have a habit of ordering the wrong thing in places like this, and wasn’t feeling at my most decisive, but managed to settle upon the soup of the day and a salad, while my esteemed fellow quester opted for a wrap, after confusing the hell out of the chap by asking if it could come served without guacamole.

I definitely won, today, as my dishes looked way more interesting than MJ’s. My Spanish chicken salad had a good balance of textures, with a good citrus zing bringing the elements together. It could have used one more gutsy flavour to really make the it sing, but the dish was well-conceived and nicely executed.

The consistency of the cauliflower soup was just right and the chopped almonds provided good crunch. The colour was somewhat mystifying: a very bright green. It wasn’t the most flavour-packed soup in history, but I was pretty satisfied with it.

Good espresso followed to round out an enjoyable lunchtime. 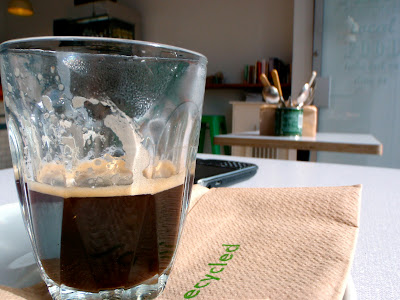 Overall, Café Milk has a likeable charm to it, and is good at what it does. However, it didn’t really wow me like it could, and perhaps should, have. There’s an opportunity being lost here, by an over-commitment to “meek chic”. It works for the setting, but the food needs to be much bolder because, as it stands, it’s not that memorable.

We wore: Shades, reflection of the letter O.