Blythe’s Verdict
Over the past few years, the Mosque Kitchen has quickly grown in to an Edinburgh staple, coming in to its own during festival time. Its location, neatly placed between the seething hubs of comedy merriment that are the Pleasance and the George Square/Bristo Square nexus plays some part in that. Its well deserved reputation for no-nonsense, reasonably priced, high quality, stamina enhancing festival fuel covers the rest.

Transported from its al fresco beginnings, adjacent to the Mosque, to fresh new premises just around the corner, how has the place coped with the transition from pigeon-friendly to four-walled splendour? I think the answer is: very well.

Many elements remain: the trademark paper plates and plastic spoons; the lightening canteen-style service; and the pleasing array of richly flavoured delights, catering with consummate simplicity for vegetarians and unabashed carnivores alike.

What’s lost is some of the camaraderie enhancing powers of the big communal tables, previously a valuable source of festival gossip and buzz, but with a couple of ten person tables, there’s still some potential for that cultural exchange to take place.

The new place is simple, bright, and relaxed. It lacks some of the undoubted charm of the old place, for sure, but they could have really screwed things up with their move indoors and they’ve not fallen in to any of the obvious traps, so well done.

I ate a meat curry, with rice and daal. The daal was excellent – as good as you’ll find in the city – and the full-flavoured meaty chunks were supremely satisfying. Round the table, we’d each chosen something a little different, but there seemed little dissention and a lot of empty plates.

Overall, it’s an unmissable Edinburgh lunch spot that represents excellent bang for your buck. If you’ve not been there, go, and if you haven’t been for a while, go back and sample it again. You won’t be disappointed.

I have to admit that, not so secretly, I didn’t think there would be any dissention in the ranks when we went to the Mosque Kitchen. For a venue that serves its offerings in plastic bowls, it has remarkable consistency.
I never went into Imans, so I can’t say how much the venue has altered since being taken over by the MQ, but over all it’s inoffensive. The food, however, fares a bit better. Like B said, we all had slightly different meals from the cafeteria style servers.  I chose saag aloo with vegetable curry on rice (I didn’t really choose the rice so much as all meals are served on a big pile  of it). The vegetables were well cooked, not overly soft and had a nice kick. The saag was well flavoured, but the mushy consistency and look makes me think of baby food; ok, Indian baby food. It’s not the best saag I’ve ever had, but it was the best damn saag I’ll likely ever taste for 4.50. And everyone else’s clear plates and thumbs up indicated a generally joyous consensus all-round. 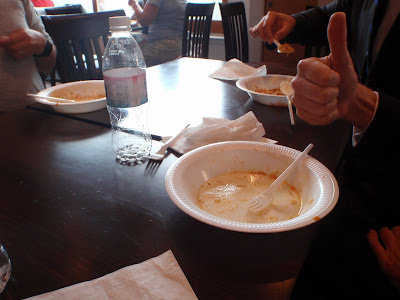 The coffee after was ok (for an India café). But we didn’t try the desserts in the glass counter which looked to try to be something for all, and seemed likely to be brought in and not made in house (though the thought of the stoic looking men who served me saag, making dainty cupcakes, is kinda fantastic). There were massive, American-sized cupcakes which looked like at some point they were normal cupcakes that turned mutant and ate one another till they grew three times the normal size; standard size cupcakes, baklava, some sort of Danish pastry and what looked to be gajar halva.
It is only right that Lunch Quest: Edinburgh, reviewed the Mosque Kitchen, not only is it a staple of Edinburgh (and especially relevant during the Fringe and term times), it is the first place B and I had lunch together many months ago, though, I prefer our current company to the pigeons we shared the table with last time.

We ate: A range of curries and sundries