Miriam’s Verdict
Today my dining compatriot and I ventured to Loudons Café and Bakery a hop skip and a jump off Lothian Road. I had almost forgotten how much longer it takes to get from point A to point B during the month of August. Silly me. As I stepped off the bus (which conveniently stops right outside the café), I could see the cool, tranquil interior of Loudons beckoning me through the floor to ceiling glass windows facing the street. As my need to punch a tourist in the back of the head subsided, I had a few moments to myself to look over the small but adorable collection of kitchen supplies for sale by the main entrance. I admit, I have no need for a colourful snack server with hidden compartment underneath the bowl for storing pits and shells, but by God I wanted one! And then the bread book. 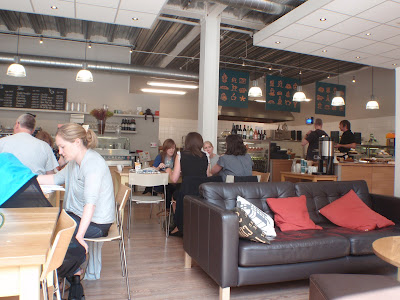 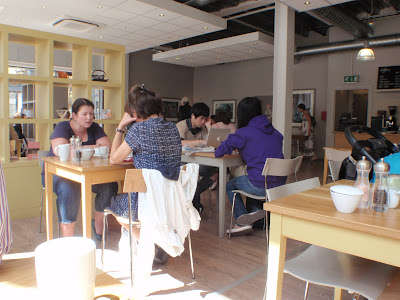 Needless to say, it was a good thing Sir Blythe arrived when he did, brandishing the Groupon deal we had scored a couple of weeks ago. 2 main meals (for breakfast, brunch or lunch) with a cake and tea or coffee for two for a measly 15 pounds. We had a look at the specials and I opted for the smoked salmon, egg, green bean sandwich on a homemade soda bread. They didn’t even balk when I requested for them to leave off the vile concept that is mayo…just no. I should probably admit here that though I come from the land where we drive to eat copious amounts of fried food (Oh yeah, you think Scotland was the king of fried foods, visit the Southeastern United States my friend! Where we can and often do fry everything.)

After Blythe was talked into the sensible choice of only ordering the bowl of soup, we handed over our and managed to find a seat at a table that was recently vacated. In moments a cheerful waitress came and asked if we had enjoyed our meal. I said, yes. Blythe then explained that those were the dishes left by previous diners. It didn’t take long before my sandwich arrived accompanied by a side salad with baby leaves, a sprinkling of toasted seeds and a light dressing. The salad itself was fresh, simple and the very lightness of the dressing and crunch of toasted seeds lifted it above regular café side salads. 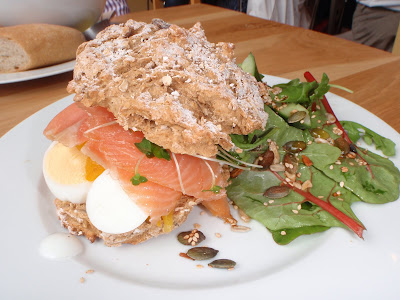 The sandwich itself was quite good, but I may just be talking about the bread. The bread was a brown soda bread that was almost too crumbly and delicious to eat without it falling apart, except for the bottom, which held on to its freshly baked crunch, and consequently made it a bit hard to cut with my butter knife. Oh, right, the stuff on the bread was good, but standard, but maybe I shot myself in the foot by not having it with the mayo. I guess I’ll never know. 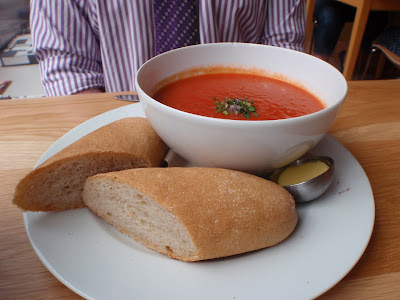 After we ate our lunch, it was time for coffee and cake. The cakes are arranged on a large table at the front of the café. And they are all freshly made, in the kitchen downstairs, which has windows so that you can become distracted on the way to and from the loos. I’m not much for sweets so I opted for a spelt scone with raspberry jam and a cup of coffee. The coffee was good. I’m a bit of a coffee snob and believe it should be very strong, and served hot and black-no puns intended, and the coffee at Loudons was smooth enough that I noticed. The scone was huge! I might have been able to eat it on its own, but after a meal it was a bit ambitious, and a touch dry. It really needed the jam to make it, but the jam was very sugary, so I ended up not really using it. 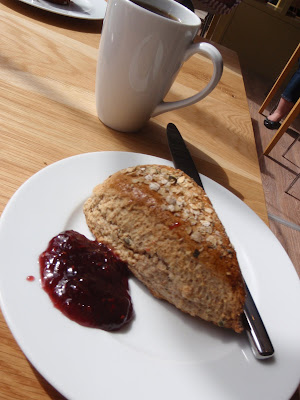 Awkward photo of my spelt scone and raspberry jam. 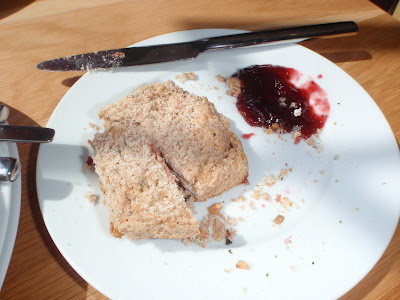 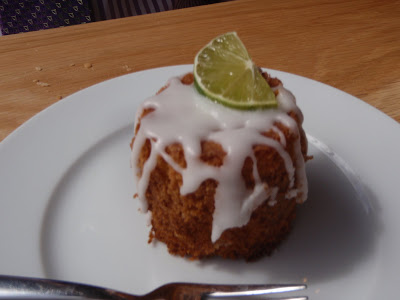 Coconut and Lime Square
Overall, we had a nice lunch in a cool café; where we were there to see and be seen in the large windows and where the minimal and stylish décor seems to absorb the hustle and bustle of the place and where we didn’t have to fight over any music to hear one another speak. I find the lack of music comforting, some might not.

What Loudons does, it does very well. But hours later, I could still taste that sugar.

Blythe’s Verdict
Loudons has had a good week. They secured a nice write-up in the Grauniad and judging by their busy restaurant, today, they’re reaping the twin benefits of this national exposure coupled with the booming crowds that August brings to Edinburgh venues. I got the impression that their bumper crop of diners were mostly drawn from Edinburgh residents fleeing from the festival frenzy, which is no bad thing in terms of retaining attendance once the calendar flips over to September.

Miriam has hit the nail right on the head: Loudons is very much a place to be seen. From our fine window seat I was spotted by no less than three people of my acquaintance, so although it has a sense of being a little bit away from Edinburgh’s strongest gaze, it’s clearly a spot where people are going to be noticed.

So, what of the victuals with which we were provided? Well, those of you who know me well will be deeply acquainted with my love of soup. Those who know me less well will grow tired of my love of soup, soon enough. Whatever the case, a bowl of hearty soup was the order of the day.

I was given fair warning that teaming this soup with another option from their menu (a sandwich, perhaps) would be a fool’s errand, given that the soup came in copious amounts and was accompanied by plentiful bread. I took heed and that advice proved to be extremely accurate.

I chose Tomato and Fennel over Carrot and Ginger and was rewarded with a good soup, a little reminiscent of a Madhur Jaffrey recipe I tried a few weeks ago. Personally, I wouldn’t serve such an enormous volume of soup to anyone, even on the coldest winter evening, but I was hungry enough to polish it off. The bread, one of the range made on the premises, soaked things up well, so served its purpose admirably.

I’ve been sneaky, this week, and reviewed the cake I had to follow this for our sister publication, Cake Quest: Edinburgh, so pop over to there to see what I made of the Coconut and Lime Square.

Overall, I thought Loudons was good, but the setting and ambience were more memorable than the food. It’s unfussy and relaxed, so suited our purposes very well, today – we spent a very enjoyable hour or so, in a cool, stylish place – but I was less convinced than Miriam.

I think, for now, I would categorise it as a place I’m likely to revisit in a few months, explore some different options from their menu, and see how it has developed, rather than considering it as somewhere I would actively recommend.

We wore: Purple stripes and tie, simple white shirt with “this is what my hair looks like when I do nothing with it” hair. 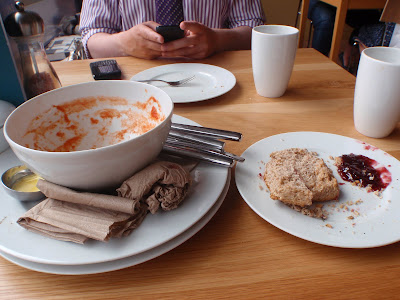