In a slight departure from our regular stuff, today I thought I’d do a little contribution on the sandwich shop lunch, a staple of those days when we don’t have somewhere lavish to dine.

I have written fondly of my halcyon days in a previous office location, where daily trips to Domenico’s brightened my very being. Nowadays, transported to one of the most unlikely lunching dead-zones in all of the city, I have to content myself with regular trips to Greggs, in between trips to more glamorous lunch spots.

Greggs is a fine old institution, founded Gosforth High Street in 1951. Although much-maligned over the years, the business is a considerable success story, with expansion continuing even in the face of straitened economic circumstances.

It has a reputation for hearty fare, and although previously criticised for being light of the calorific detail, you can now munch sandwiches in proud awareness of the 770 calories you are about to ingest.

Among my generation of grubby, unhealthy, slovenly blokes, Greggs provides a widely accepted taste marker. As once there was Miller or Kronenbourg, Marlboro or B&H, there is and always will be Steak Bake or Macaroni Pie.

Now, this is not to say that the steak bake and macaroni pie are mutually exclusive, but it’s certainly always at the forefront of considerations. For me, it’s always the macaroni pie. Indeed, this carbohydrate loaded beauty has a very special place in Lunch Quest hearts, given that it’s one of the great inspirations behind the establishment of Lunch Quest: Jerusalem.

I digress. To the task at hand: is lunch from Greggs any good? Let’s confine things to what we sampled, today, for now. My colleague Gary, who previously joined us for a spot of Mosque Kitchen lunch questing, chose a limited edition Mexican Bandit baguette. 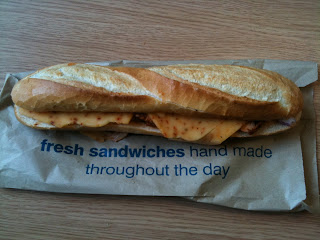 I chose a simple ham and cheese. 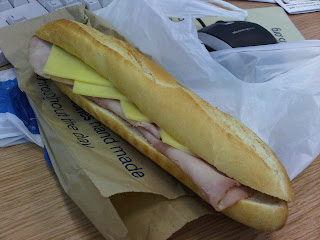 We then pooled our resources to capture a pair of macaroni pies at a knock down price of 2 for £1.50.

My cheese and ham baguette was a remarkably literal interpretation. It had cheese, ham and nothing more than a smear of butter. 10/10 for accuracy; 2/10 for imagination. Gary’s had some spicy chicken and chilli cheese, with sweet chilli relish and a hint of mayo, topped with crunchy salad. These were both good enough, but largely unremarkable.

However, as previously suggested, it is with baked goods that Greggs excels. Today’s macaroni pies were spot-on: warm but not volcanic; filled to the brim with gooey goodness; and caramelised to just the right level. They’re possibly the most unhealthy thing in history, but boy do they taste good! 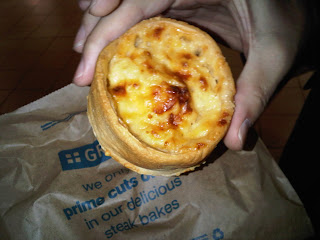 As a one-off experience, I think you’ll be pleasantly surprised with Greggs. They keep things simple, cater to their audience, and make tasty things.

But here’s the rub: repeated exposure can’t be good. Primarily, their range, particularly on the sandwich front, lacks sophistication and breadth. Due to the aforementioned lunch dead-zone, I eat at Greggs a couple of times a week. I will never tire of their baked goods, but the sandwiches quickly lose their appeal. The calorific content probably isn’t entirely a good thing, either.

On that dead-zone, I wish Domenico’s would hurry up and open “Domenico’s in the City”. Our other options in the vicinity are Deli Fresco on Leith Street, which offers incredibly poor quality and value, and The Square in North St David’s Street, which I quite like but is a little pricey.

I suppose I could use Boots, but the idea of buying lunch from a chemist that wants to prescribe me crisps for lunch has never quite appealed.

So, I’d say pop in to Greggs and try their stuff, but keep lunchtime visits well spaced out. On the other hand, macaroni pie indulgence time should be as frequent as your physician and tailor will allow! 😉

We wore: The workaday suits of automaton drudgery

We drank: Nothing but salty tears

Various Outlets across Edinburgh (and beyond)